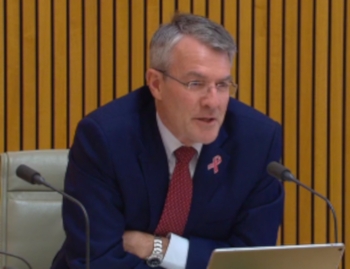 The Australian Labor Party has said that it will be dissenting with the government members on the panel that is inquiring into the encryption bill. But the government says it will be pressing on and presenting the bill in Parliament next week, the last sitting week for the year.

Labor Shadow Attorney-General Mark Dreyfus said in a letter to Attorney-General Christian Porter that the Parliamentary Joint Committee on Intelligence and Security had worked to pass more than 15 national security laws since 2014, with 300 amendments.

But, he said, this time the Labor Party had been pushed too far.

The content of Dreyfus' letter became public soon after the fourth hearing on the bill, officially known as the Telecommunications and Other Legislation Amendment (Assistance and Access) Bill 2018, was held in Canberra on Friday morning. On Thursday, Senate president Senator Scott Ryan made a submission to the PJCIS, saying that the powers in the bill could clash with the exercising of parliamentary privilege.

“Under Prime Minister [Scott] Morrison, its processes appear to have broken down, thanks due to the interference with the committee by key ministers in your government, and ultimately, the subversion of the democratic parliamentary committee process,” Dreyfus wrote.

Morrison and Home Affairs Peter Dutton held a media conference last week, pushing the PJCIS to finalise the bill so it could be passed before Parliament rises for the year on 6 December.

Encryption fight: Labor’s letter to Attorney-General confirming it will not pass all “flawed” laws by Christmas.
This is the first time in a decade that the Joint Standing Committee on Intelligence Matters could not reach bipartisan approach pic.twitter.com/cQC9PiZwdz

“Labor listened to the evidence put forward by agencies regarding the urgency of the [bill] and we accepted it. Labor’s position is that an interim version of the Access bill should be passed, to give the agencies the powers they said were necessary now, on an interim basis, while the committee continued its scrutiny of the Access bill,” Dreyfus wrote.

On Monday, Labor had raised the option of passing schedule one of the bill, the bit that gives new powers to the spy agencies, if it was only available to counter-terror agencies.

On Friday, Dreyfus clashed with Liberal Senator Jim Molan during the hearing, accusing him of badgering witnesses. The same day, the PJCIS heard what is arguably the most forceful testimony from anyone who has fronted the panel, with encryption technology firm Senetas' chairman Francis Galbally pulling no punches in outlining what he characterised as the negative impact the bill would have on the country as a whole.

In the letter, Dreyfus further said: "“Your government’s refusal to even work with this offer, despite written assurances of support, is extremely disappointing. To be clear, this would have clearly met the stated needs of the security agencies, while allowing the committee to identify deficiencies in this rushed legislation, which could only result in recommendations to strengthen it, not weaken it.

“… The committee heard powerful testimony that the bill in its current form could weaken Australia’s national security by creating deficiencies that allow criminals or state actors access to encrypted systems, that it could result in the loss of jobs and see some Australian companies offshore, and that it lacks adequate safeguards to balance against the increase in intrusive powers.

“The potential implications this has for weakening online security for all Australians conducting legitimate, everyday business are profound, and surely warrants further consideration.”

But Porter and Dutton were unmoved and in a response said: "Labor has sought to render the Bill ineffective by taking serious criminals, front-line state police, and encrypted messaging services out of its scope. The government puts the security and prosperity of the Australian people at the top of its agenda.

"We will also present all reasonable amendments that have been proposed, including several by Labor, while rejecting those unreasonable propositions that would render the Bill ineffective.

"It is time for [Labor leader] Bill Shorten to intervene and overrule Mark Dreyfus to ensure the safety of the Australian community."

More in this category: « Turnbull's 'laws of mathematics' statement is still alive Encryption bill: Labor accuses PM of compromising national security »
Share News tips for the iTWire Journalists? Your tip will be anonymous