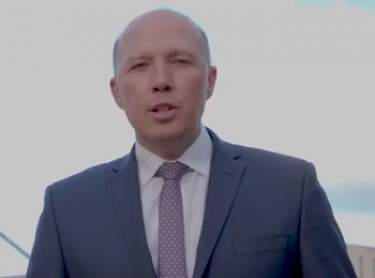 Peter Dutton: "How can we accept Zuckerberg’s and Cook’s argument that the privacy of criminals is more important than the safety of our children?" Courtesy YouTube

Home Affairs Minister Peter Dutton has slammed the chief executives of Facebook and Apple, Mark Zuckerberg and Tim Cook respectively, accusing them of being "morally bankrupt on the issue of encryption and protecting children".

In a speech on Thursday to a global summit to tackle child sexual exploitation being held in Addis Ababa, Dutton said Zuckerberg, Cook and other CEOs would not put up with bullying, sexual harassment or exploitation in their workplaces.

"But at the same time they tolerate the use of their platforms for the sexual exploitation of children, predominately young girls; many of whom will be physically and mentally scarred – in many cases for life – particularly when the image is shared and shared and shared again," he added.

Dutton and his counterparts in the US and UK have been pushing Facebook not to extend end-to-end encryption to its Messenger client, claiming that the use of encryption is helping child abusers to shield their identities and avoid the clutches of law enforcement.

He told the summit that some companies had tried to identify, report and get rid of illicit content on their platforms.

"...there’s an inherent contradiction between this behaviour and intentions of some companies to adopt end-to-end encryption," Dutton added.

"Just this week we received a response to a letter that UK Home Secretary [Priti] Patel and US Attorney-General [William] Barr and I penned to the CEO of Facebook. Mr Zuckerberg did not even have the decency to respond, the response was from the vice-presidents who head up WhatsApp and Messenger who advise that the privacy of their users is paramount to their business.

"They claim, and I quote, that 'keeping people safe is one of our biggest priorities at Facebook'. Well, it is nothing more than public relations spin and frankly to all, an insult. Are they forgetting the millions of children who will never be kept safe when end-to-end encryption is adopted as standard practice?"

"Do they think that by 'going dark' they will be absolving themselves of responsibility for despicable criminal acts that take place on their platforms?"

Dutton said technology companies had claimed that governments were looking to establish backdoors "that would leave all users significantly more vulnerable to real life harm from criminals and others".

"Ladies and gentlemen, this proposition is completely and utterly untrue. It is a lie, and seems to be a convenient excuse to prevent them from continuing to provide critical support to our law enforcement agencies – those who ensure the safety and security of our children and the broader community," he said.

"We don’t want keys or code. We want them to comply with the law like any other corporation. A warrant issued by a court requires a bank to hand over a customer’s details. We don’t have the keys to the vault or passwords to their bank computers, but the bank furnishes the information. We ask nothing more and nothing less of Apple, Google and the like."

More in this category: « Government response to Digital Platforms Inquiry gets thumbs up from ACCC Australian classification regulations under review by Government »
back to top