Big tech or Aussies? Decide on whom you support, Dutton tells Labor Featured 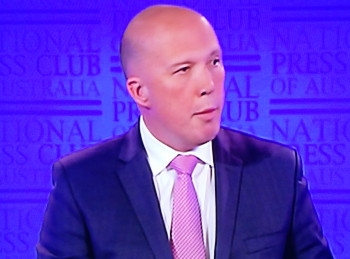 The Australian Labor Party's support for the government's encryption Bill will be an indicator of whether it supports big technology companies in the US or the Australian people, Home Affairs Minister Peter Dutton claims.

In a speech to the National Press Club in Canberra on Wednesday — in connection with the Crime Stoppers National Conference which is being held in the nation's capital — Dutton said the bill could only become law if it was supported in the Senate by Labor.

"We want bipartisan support for key national security bills, but this is one where [Shadow Attorney-General] Mark Dreyfus is playing games and [Opposition leader Bill] Shorten needs to exert his authority and support the Bill," Dutton said in a long speech, which took a much more moderate tone than one in February, where he threatened companies which refused to decrypt communications when asked.

"The decision for Mr Shorten is whether he supports the Silicon Valley multi-billion dollar companies or whether he's on the side of protecting Australians, and we have countless live investigations, right this very day, being hampered by the limitation in the current law and it is time to change this law," he said.

Dutton introduced the bill into Parliament on 20 September, just 10 days after the period for public comment on the draft ended. One day was initially set aside for a hearing before the Parliamentary Joint Committee on Intelligence and Security, but there are indications now that this will be increased.

The Labor Party has not said yet whether it will support the bill, but Dreyfus told  iTWire last month that the party would engage in a "constructive dialogue" with the government over the Bill. On Tuesday, Shadow Communications Minister Michelle Rowland told a Sydney conference that the Bill required much more measured debate than what the government seemed to want.

Dutton's speech went over all the old arguments he has made in the past, with child pornography and terrorism prominent.

"Terrorists and criminals are using encrypted communications to avoid detection and disruption and it makes the task of conducting an investigation, to say nothing of disrupting terror attacks or criminal activity, more difficult than it has ever been," Dutton said.

"Society has long seen value in enabling our law enforcement agencies to access telephone communications and related data with the appropriate warrants and justifiable cause. Now, this is legitimate activity that helps to protect our community. So it defies common sense that this access should be denied simply because the mode of communication has changed."

He slammed "multi-billion dollar Silicon Valley companies" whom he said were opposing the Bill.

"And it should be noted, these yes, are the same companies who protest about having to help police with the encryption problem, whilst operating their businesses in less democratic countries and accepting at the same time a compromise on privacy to allow their presence in those growth markets."

Dutton also went into detail on organised crime, both national and international, money laundering and drug trafficking in his speech.

The draft of the proposed legislation, officially known as the Telecommunications and Other Legislation Amendment (Assistance and Access) Bill 2018, was released for public comment on 14 August. The period for comment ended on 10 September and as of Wednesday morning, the government had released 343 submissions online.

More in this category: « Encryption bill will hit family violence victims: claim This is no time to weaken encryption, Apple tells Canberra »
Share News tips for the iTWire Journalists? Your tip will be anonymous