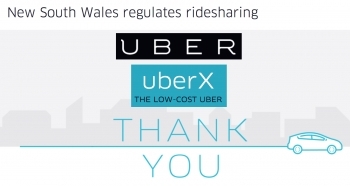 Uber has sent an email out to its customers promoting UberX’s safety and reliability, noting it is welcome ‘in the ACT, WA and NSW.’

Uber latest email to customers and users has again celebrated the fact the government of the Australian state of New South Wales has said ‘yes’ to uberX.

Uber’s email states: “Last week, the NSW Government announced it would embrace ridesharing and introduce legislation to ensure uberX continues to be part of the way Sydneysiders get around the city and opened the door for ridesharing in towns and cities across the State.

“Half a million Sydneysiders are choosing uberX as a safe, reliable and affordable way to get around. Over 5,500 drivers are earning a flexible income by moving people from A to B in their own cars.”

Uber’s email concludes by stating: “Ridesharing has now been welcomed in the ACT, WA and NSW, and we’re continuing to work with Governments across Australia to ensure that the same opportunities are available in every State and Territory.”

The email is signed off by ‘David, Henry and the Uber Sydney team’

A link to Uber’s 'newsroom' blog post saying ‘Thank You’ to NSW is here.

More in this category: « ACMA promises ‘easier access to spectrum’ for Internet of Things Google out of sync with CEO Schmidt on Android earnings »
Share News tips for the iTWire Journalists? Your tip will be anonymous