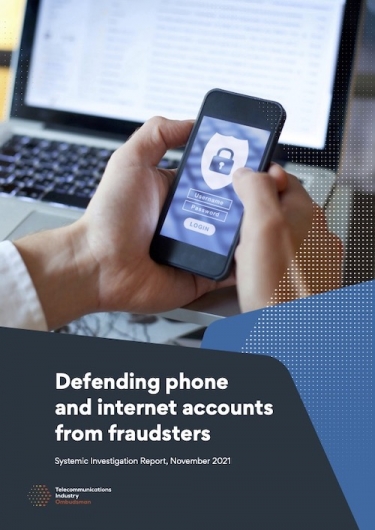 The Telecommunications Industry Ombudsman (TIO) released a report on systemic investigations into fraud enabled through phone and internet accounts.

The report “Defending phone and internet accounts from fraudsters” shares the TIO’s findings on fraudsters being able to access telco accounts and conduct malicious activity. It explores consumers’ experiences and highlights improvements made by telco providers to combat fraudulent account access.

In the last financial year, the TIO said it received over 500 complaints from consumers who said they had fallen victim to telco related fraud. Consumers said their telco account was accessed without their authorisation which not only resulted in significant inconvenience but in some cases also resulted in financial loss and safety concerns, the TIO commented.

Ombudsman Judi Jones said, “Each year Australians lose millions of dollars from fraud, often facilitated through phone or internet services. Addressing fraud is becoming more critical as people increasingly use their phone and internet to access goods and services, manage their finances and verify their identity.

"This report shows that the detriment suffered by consumers who are targeted by fraudsters through their phone or internet account can be devastating."

Based on investigations and complaints, the TIO says it identified four common themes which contribute to fraudsters accessing telco accounts:

The report features tips for telcos and consumers to help protect against fraudsters.

The TIO suggests these tips for telcos include:

“Telcos who have robust verification procedures and quick response times are more likely to prevent fraud from occurring and to limit detriment if a consumer does fall victim to fraud. And while these initiatives help to address some of the issues we found, both telcos and consumers must remain vigilant about the constantly evolving behaviour of fraudsters," says Jones.

TIO tips for consumers include:

The Communication Alliance says the report also notes the suite of measures put into place by the telecommunications industry in recent years to combat fraud and scams, including:

Communications Alliance CEO John Stanton said, “We welcome the TIO engaging with this topic. Combating the rising scourge of scams and fraud is a challenge that requires all parties to be vigilant and to assist consumers where possible.

“Telcos are continually improving their practices to keep up with the ever-changing tactics of fraudsters. It is important that we do not become complacent and remind our customers to protect their personal information, offline as much as online.”

“The TIO’s systemic investigation powers means we can identify issues with the telco industry’s regular systems, processes or practices and issues that may cause harm to consumers. By investigating issues, raising awareness, and working with the telcos to make changes, we drive improvements in the delivery of phone and internet services. This leads to better outcomes for consumers and the telecommunications industry,” Jones concluded.

The report can be downloaded here.

This first appeared in the subscription newsletter CommsWire on 24 November 2021.

More in this category: « Fears about real agenda behind Online Safety Bill after US podcast Govt promises new rules to force online firms to unmask trolls »
Share News tips for the iTWire Journalists? Your tip will be anonymous