The Facebook pages of the Bureau of Meteorology and numerous government organisations are among those that cannot be viewed after the social media firm instituted a ban on Australian publishers and people from sharing or viewing Australian and international news content.

These pages merely say "no posts yet", though there would have been plenty of content ahead of the imposition of the restrictions.

So @Facebook has blocked access to our website. We are not a news organisation. Australian workers can not now find out about their rights at work via @Facebook. This is disgraceful & needs to be reversed immediately pic.twitter.com/588Qf1JbuD

Opposition Leader Anthony Albanese joined the fray of complaints, tweeting: "During a global pandemic, Australians can't access state health departments on Facebook. On a day of flood and fire warnings in Queensland and WA, Australians can’t access the Bureau of Meteorology on Facebook. 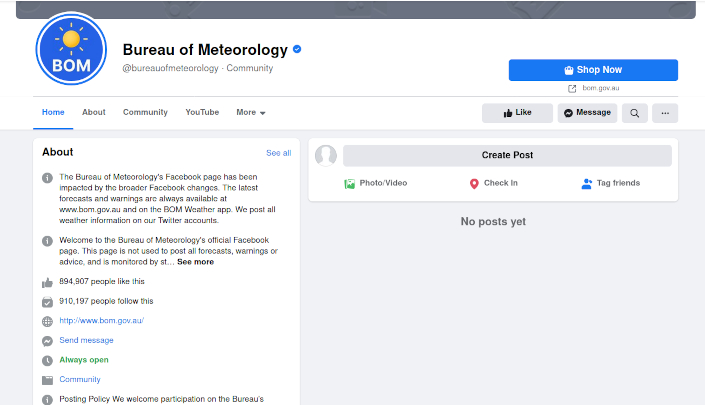 "The Morrison Government needs to fix this today."

The Australian Council of Trade Unions page was also blocked, with ACTU secretary Sally McManus complaining: "So @Facebook has blocked access to our website. We are not a news organisation.

The Morrison Government needs to fix this today.

"Australian workers cannot now find out about their rights at work via @Facebook. This is disgraceful & needs to be reversed immediately."

Labor voted to pass the News Media and Digital Platforms Bargaining Code bill, the reason for Facebook's ban, in the House of Representatives on Wednesday night.

There were many complaints from Facebook users on Twitter. Michael West, a journalist who runs his own news site, outlined his problems with a tweet, explaining that he was being shafted from both ends.

However, one Twitter user noted that the Facebook page of Liberal MP Craig Kelley, who has been accused of using it to spread false information, is still up.

Facebook: deplatforming Nazis is too hard. We just can't do it.

Also Facebook: WE ARE GOING TO WIPE ANY TRACE OF ANYTHING THAT EVEN SMELLS LIKE IT COULD BE AUSTRALIAN NEWS YOU CHAZZWAZZER DRONGOS

"From the government's perspective, the Code is an attempt to address the power imbalance between journalism firms and the major technology titans. This is one way the government is attempting to support revenue for newspaper publishers, which has declined at an annualised 6.2% over the past five years."

Harrison pointed out that the newspaper publishing industry was forecast to contract by a further annualised 2.8% over the five years through 2025-26, to $2.7 billion, adding that almost 4400 jobs had been lost over the past five years, and employment was projected to contract at an annualised 3.0% over the next five years, to total 9400 employees.