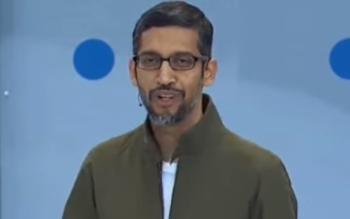 Sundar Pichai: "We are thoughtfully considering a variety of options for how to offer services in China in a way that is consistent with our mission." Courtesy YouTube

Google chief executive Sundar Pichai has avoided answering pointed questions posed by six US senators about the company's plan to launch a censored search engine in China, instead resorting to broad generalities such as the claim that the move would have “broad benefits inside and outside of China".

In a response to a letter from the six politicians — which was obtained by The Intercept, the website that broke the story of Google's China plan — Pichai wrote: "Google has been open about our desire to increase our ability to serve users in China and other countries. We are thoughtfully considering a variety of options for how to offer services in China in a way that is consistent with our mission.

"We are committed to promoting access to information, freedom of expression, and user privacy, as well as to respecting the laws of jurisdictions in which we operate. We seek to strike the right balance in each context."

The US senators — Republicans Marco Rubio of Florida, Tom Cotton of Arkansas and Cory Gardner of Colorado, and Democrats Mark Warner of Virginia, Ron Wyden of Oregon and Robert Menendez of New Jersey — sent their letter to Pichai on 3 August, and asked for a "prompt reply".

They had asked the following questions:

Pichai did not deal with any of these queries. Instead, he characterised the project for the China search engine as a part of Google's Next Billion Users initiative, which was geared towards, "providing people in developing countries with customised products and solutions so they can use the power of the Internet and smartphones to better their lives".

In the two months since The Intercept's Ryan Gallagher broke the story, there have been a number of developments:

In his letter, Pichai said: "We recently released a few mobile apps in China, such as Google Translate for Chinese users. But Search and our other core services, such as Google Play, Google Cloud, and many more high-quality offerings remain generally unavailable."

And he added, "We hope to stay at the forefront of technology developments and believe that Google's tools could help to facilitate an exchange of information and learning that would have broad benefits inside and outside of China."

Gallagher sought a response from the six senators who sent the letter to Pichai and one of them, Warner, said he was disappointed with Google’s response which, he said, failed to provide any information.

“Any effort to get back into China could enable the Chinese Government in repressing and manipulating their citizens,” said Warner. “Google owes us some honest answers, or it risks losing the trust of Congress and the public.”

The Dragonfly project is said to have started after Pichai held discussions with Wang Huning, a senior figure in the Chinese Communist Party, in December 2017. Work was begun during the Western spring of 2017 and was fast-tracked after the Pichai-Huning meeting.

Programmers created a customised Android search app with different versions known as Maotai and Longfei and these were then demonstrated to Chinese Government authorities.

Since The Intercept's first report, Google has made no public statement about the project, though it has been asked for a statement on more than a dozen occasions.