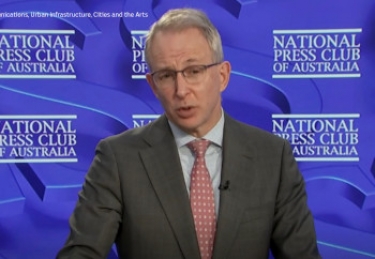 Paul Fletcher addressing an audience at the National Press Club on Wednesday.

Big technology companies have come in for criticism by Communications Minister Paul Fletcher for resisting attempts by the Australian Government to create regulations to keep them in line.

Answering questions after a speech, made virtually to the National Press Club in Canberra on Wednesday, Fletcher said recent reports about Facebook luring youth towards damaging content were a reminder that such companies needed to be regulated.

A former Facebook employee named Frances Haugen appeared before the US Congress this week outlining ways in which Facebook and Instagram were posing a danger to young users.

She had leaked a number of documents to the Wall Street Journal weeks ago, based on which the newspaper published a number of articles that were damaging to the social media site.

Said Fletcher: “What we’ve seen over the past few days in the statements from the Facebook whistleblower, in the US Congressional hearing and in associated media coverage, is a reminder of the significance of these issues.

“It is not greatly surprising to me, given that with just about every change that we have sought to make in our time in government there has been resistance from the tech giants. 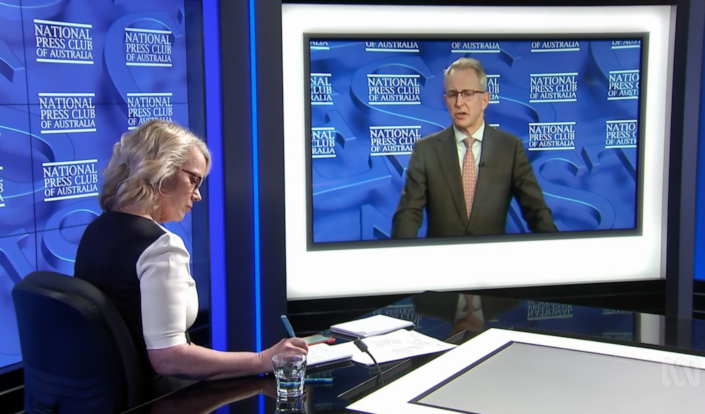 Fletcher answers questions after his speech. On the left is NPC president Laura Tingle, an chief political correspondent for the ABC's 7.30 current affairs program.

“That is true of the News Media Bargaining Code, true of online safety legislation, it is true of the change we made a few years ago to remove the exemption from GST for transactions conducted online under a certain threshold.”

Fletcher's speech was a summary of his recent book, Governing in the Internet Age, which was authored after he was asked to write a short book by Monash University Publishing for its series titled In the National Interest.

He outlined the process that had been followed to put in place the News Media Bargaining Code and the Online Safety law.

"I accept that governments need to think carefully about how to design regulation in this new world. But that does not mean governments cannot or should not regulate," Fletcher said.

"...the digital behemoths will make all kinds of claims and threats when you impose the normal laws that apply to other businesses in your jurisdiction upon them.

"But ultimately, as our experience with the News Media Bargaining Code has shown, the global digital giants will accept the rule of law if they are doing business in Australia."

More in this category: « EU to file anti-trust suit against Apple over NFC chip: claim Anti-trust suspicion: Japan to take a good look at Apple, Google »
Share News tips for the iTWire Journalists? Your tip will be anonymous