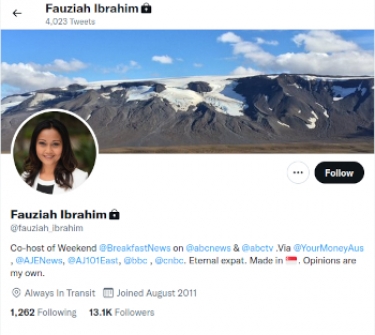 The ABC News presenter who was found to be hosting public Twitter lists on her account of those she categorised as Labor Trolls and Lobotomised Shitheads appears to have gone missing.

Fauziah Ibrahim normally fronts up for the ABC News morning program on the weekend, along with Joanna Nicholson.

But on Saturday and again on Sunday, Nicholson was joined by John Barron, who hosts the Planet America program. The ABC has made no public statement about the change or why it was necessitated.

I haven't seen one tweet lamenting the absence of Fauziah Ibrahim.?

Ibrahim has changed the picture on her Twitter account from an ABC News logo to something quite different as cen be seen above. The old photo can be seen here.

The ABC was asked on Tuesday for a clarification as to what had actually happened, given that there were doubts over whether Ibrahim's Twitter account had been breached or whether she had created the lists herself. 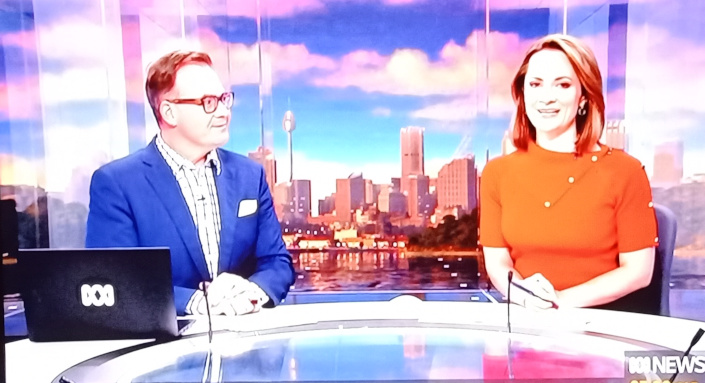 No reply was received from the ABC that day.

Glad to see the inimitable John Barron on ABC weekend news breakfast today.
If Fauziah Ibrahim had been on I would have immediately turned it off.
Her behaviour has no place on the ABC.

An ABC spokesperson attempted to play down the faux pas last Sunday when iTWire — the first to report on the snafu — contacted the corporation, by saying the account was a personal one.

But as reported, the ABC has rules for its staff who maintain personal Twitter accounts.

In it, the corporation says while personal posts are not required to adhere to the corporation's editorial polices, two areas — impartiality and independence and integrity — should not be compromised.

More in this category: « European Union agrees on laws to crack down on digital companies ACCC takes 'deceptive' Uber to court »
Share News tips for the iTWire Journalists? Your tip will be anonymous