The European Commission has hit Google with a fine of €2.42 billion (US$2.7 billion) for allegedly abusing its search engine dominance to give illegal advantage to its own comparison shopping service.

The fine was announced in Brussels this evening Australian time.

The company was told that it must end this behaviour within 90 days or face penalty payments of up to 5% of the daily worldwide turnover of Alphabet, its parent company.

Commissioner Margrethe Vestager, who is in charge of EU competition policy, said: "Google has come up with many innovative products and services that have made a difference to our lives. That's a good thing. 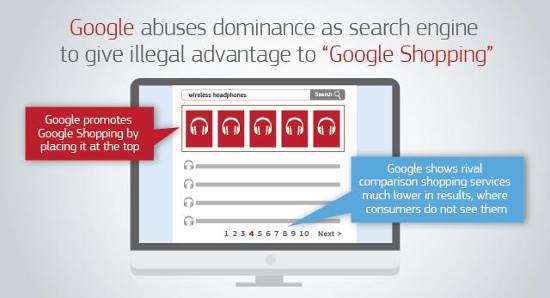 A statement said: "Google's illegal practices have had a significant impact on competition between Google's own comparison shopping service and rival services.

"They allowed Google's comparison shopping service to make significant gains in traffic at the expense of its rivals and to the detriment of European consumers."

The EC has two other investigations going on, one into Google's Android mobile operating system and the other into its Adsense advertising service. In both cases, the EC has made a prelimimary determination that Google has again abused its dominant position.

In a blog post, Google’s lawyer Kent Walker said the company did not agree with the EC’s conclusions and would consider a court appeal.

"When you shop online, you want to find the products you’re looking for quickly and easily,” he said. “And advertisers want to promote those same products. That’s why Google shows shopping ads, connecting our users with thousands of advertisers, large and small, in ways that are useful for both.

"We think our current shopping results are useful and are a much-improved version of the text-only ads we showed a decade ago."

More in this category: « Russia gives Microsoft a month to act on 'monopoly' issues Online store operator jailed for defying court orders »
Share News tips for the iTWire Journalists? Your tip will be anonymous