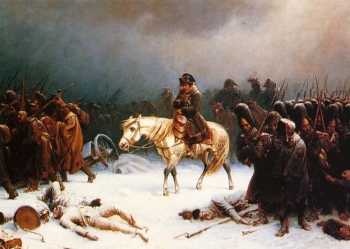 Napoleon did it in 1812. Now Google, Microsoft, Adobe and many other ICT companies are retreating from Moscow, ending or greatly downgrading their presence in Russia.

They usually give innocuous reasons, skirting around the fact that the real cause is the country’s increasingly repressive Internet and business environment. They don’t want to offend an increasingly paranoid Kremlin, headed by a man who believes the whole Internet is a CIA plot.

Google is the latest to scale down its Russian operations, announcing this week that it will now longer conduct R&D in the Russian Federation, and removing its Moscow-based engineers. Last month Microsoft moved its eastern European Skype development team from Moscow to Prague. Adobe has pulled out of Russia entirely, saying it can now do everything from the cloud.

They are victims of what is essentially a new Cold War. Russian President Vladimir Putin is increasingly suspicious of the West and increasingly belligerent in his efforts to build a new Russian Empire, as events in the Crimea and Ukraine demonstrate.

The most significant reason Western ICT companies are deserting Russia is a new law requiring ICT companies that do business in Russia to store their customer data locally. The law was originally to take effect from September 2016, but the deadline was recently moved forward to next month.

News agency Bloomberg quotes IDC as estimating that Facebook and Twitter will need as many as 1500 additional servers in Russia to comply, at the cost of millions of dollars a year.

Putin made news in April when he said the Internet was a front for the CIA. He has warned Russians against using Google, saying “Google’s web traffic goes though servers in the US. Everything is monitored there.

“You should always bear in mind that such is the reality created by the Americans. They did it,” he said, referring to the Internet’s origins as ARPANET, a joint US military and academic exercise.

Russia is ranked a lowly 55th on The Web Index’s ranking of Internet freedom. Since the fall of Communism the country has become a restrictive oligarchy. Based on the latest developments, things are getting worse, not better.

More in this category: « The Pirate Bay shut down again – for now Aargh, me hearties! The Pirate Bay is back »
Share News tips for the iTWire Journalists? Your tip will be anonymous