Former Independent senator Nick Xenophon has put the cat among the pigeons, pointing out that while Chinese vendor Huawei has been banned from supplying gear to the 5G networks, Telstra, which gets its 5G gear from a joint-venture arrangement between Ericsson and Panda Electronics, faces no such strictures.

Xenophon, who runs the legal firm XenophonDavis along with former ace journalist Mark Davis, has an advisory role with Huawei, helping the company to fight slurs against its reputation.

He told Sky News Australia on Sunday that Telstra had also been getting its 3G and 4G equipment made in China through the same joint venture. Panda Electronics, a Chinese state-owned company, was listed by the US Department of Defence along with 19 other companies that it says are either owned by, or controlled, by the People's Liberation Army.

"What I am concerned about is the fact that Huawei has been banned and I think the process has been unfair and there has been a lack of due process – it has lacked all of the things that we should afford a company operating within the law in Australia," Xenophon told the broadcaster.

"What is extraordinary is that Telstra is getting its 5G kit, as well as 4G and 3G for the last decade before that, from a company, a joint-venture arrangement, with Ericsson and Panda Electronics. The gear is made in China and Panda Electronics is actually state-owned and, according to the US Department of Defence, it is run by the People's Liberation Army – that's what the US Department of Defence itself is saying.

"We have heard outrage about Huawei, but we don't hear anyone talking about the fact that Panda Electronics is providing equipment right now to Telstra – this is our national carrier that provides services to ASIO, ASD and other critical communications infrastructure! 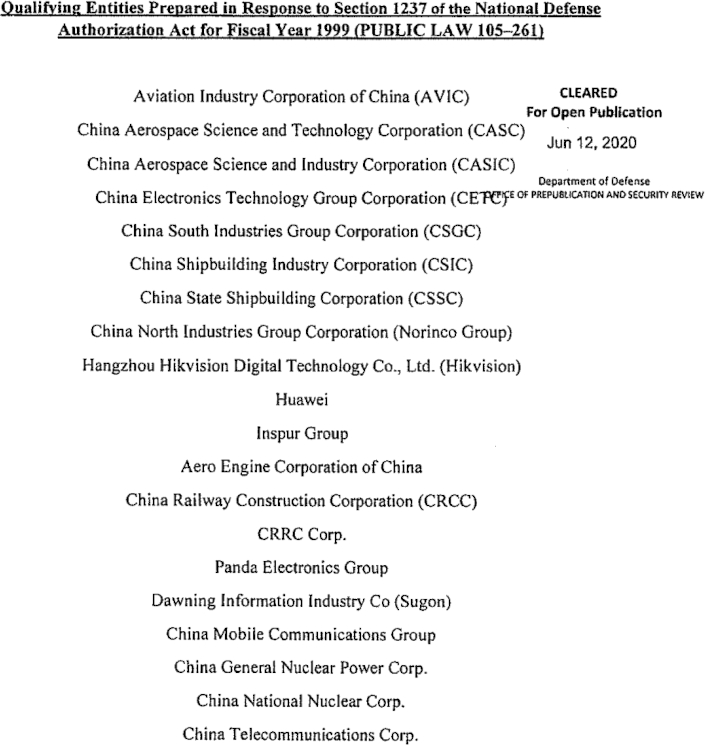 The list of Chinese companies issued by the US Departtment of Defence, all claimed to be owned or controlled by the People's Liberation Amry.

"There seems to be a double standard here;, it seems that Huawei has been a convenient whipping post and yet Telstra – which by the way happens to be a corporate sponsor of the Australian Strategic Policy Institute – is fine."

As iTWire reported last week, the DoD issued a list which included Panda Electronics along with 19 other companies, all of which it claimed were owned or controlled by the PLA. 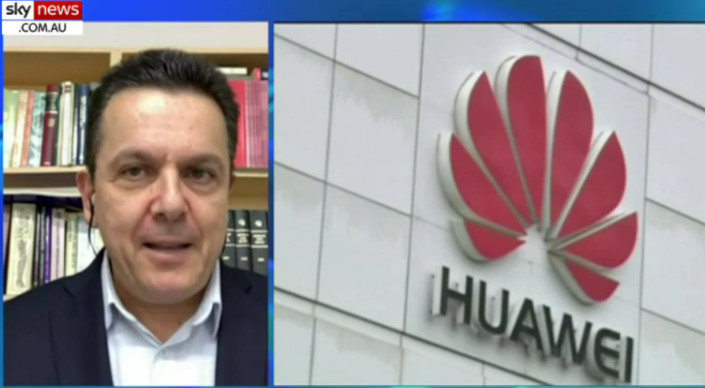 Nick Xenophon: "There is a double standard here, I have not heard the Australian Strategic Policy Institute say anything about the fact that Panda Electronics in its joint-venture arrangement with Ericsson is providing 4G and 5G gear for our national carrier in the form of Telstra – where has the vetting been?" Screenshot: Sky News Australia

The third big global supplier of 5G gear, Finland's Nokia, also partners with a state-owned entity in China. Known as Nokia Shanghai Bell, it is a joint venture with state-owned China Huaxin Post & Telecommunication. But Nokia's partner was not named on the DoD's list.

When Ericsson was asked about this arrangement, the company responded mostly in general terms, adding only one line relevant to iTWire's queries: "The Panda Electronics Group is one of several minority owners to the joint venture and does not supply components to any equipment utilised in Ericsson's equipment, including those supplied to Australian customers."

The Department of Home Affairs also skipped past the nub of the query, saying in response that it would not comment on specific companies.

"Given the importance of 5G networks to Australian society, the security of these networks is paramount," a spokesperson told iTWire. "The Australian Government has taken steps to secure Australia's critical networks and infrastructure, in particular Australia's 5G networks."

Telstra general manager – Media, Steve Carey, said: "We can confidently say Telstra does not have any equipment from Chinese network vendors in its network now, nor have we in the past. We also work closely with our network partner Ericsson to ensure all components of our network are secure."

Xenophon said the situation presented a clear example of a double standard. "There is a double standard here, I have not heard ASPI say anything about the fact that Panda Electronics in its joint-venture arrangement with Ericsson is providing 4G and 5G gear for our national carrier in the form of Telstra – where has the vetting been?" he asked.

"What is extraordinary in this whole process has been that Huawei has said, 'We want to comply with all Australian law, that's our first priority, we will comply with the law in whatever country we operate in'. That has to be their priority and they have offered all of the source code, all of the material, in order to ensure that there are no backdoors, there are no frontdoors and there are no issues there of foreign interference.

"Yet Ericsson and Nokia, who have joint-venture arrangements in place to make 5G equipment in China with state-owned enterprises, were not as forthcoming in terms as having their equipment being subject to the same level of scrutiny that Huawei wanted."

Xenophon said Huawei had been an open book on this and he thought there was a double standard. "What has been missing in all of this has been a fact-based debate because the facts actually matter here," he pointed out. "Huawei, in its more than 15 years in Australia, has been a model corporate citizen; there has never been any suggestion, let alone evidence, that they have done the wrong thing.

"Their priority is to comply with Australian security laws... my concern is that we have had a debate that has not been based on the facts, it has been based on a number of myths.

"I find it extraordinary that our national carrier, Telstra, that deals with very sensitive communications, is getting its 4G and 5G equipment from a company, that according to the US Department of Defence, is not only owned by the Chinese Government, but under the control of the People's Liberation Army. I have not heard the Australian Strategic Policy Institute complain about that and I would have thought they would have taken an interest in it since Telstra is one of their corporate sponsors.

"Where is the scrutiny of that? There is a double standard here, Huawei is a convenient whipping post."

More in this category: « Huawei seeks delay in removal of gear from UK networks: report BT chief says at least seven years needed to rip out Huawei gear »
Share News tips for the iTWire Journalists? Your tip will be anonymous