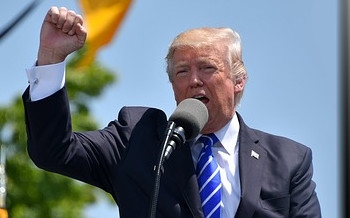 US President Donald Trump has hinted at what some observers have been saying all along – that Chinese telecommunications equipment provider Huawei Technologies will be part of a US-China trade deal whenever it is finalised.

And in so doing, he contradicted his Secretary of State, Mike Pompeo, who stated precisely the opposite, the news agency AFP reported.

Well-known Australian telecommunications commentator Paul Budde told iTWire recently that Trump was using the Huawei issue to put pressure on China to agree to a trade deal on his terms.

On Thursday, Trump told reporters at the White House: "Huawei is something that is very dangerous. You look at what they’ve done from a security standpoint, a military standpoint. Very dangerous.”

But despite that, Trump added, the odds were good that the US and China would reach a deal to end the escalating row over trade and "it’s possible that Huawei would be included in a trade deal".

He made the remarks at a media conference held to announce that his administration would provide US$16 billion to help farmers who have been affected by the trade tensions between Beijing and Washington.

Just hours earlier, Pompeo told CNBC that there were two separate elements to the row with China: “the national security component” and moves to try “to create a fair reciprocal balanced trade relationship between the two countries".

“I hope that we can keep those issues in their own place. We have an imperative to protect American national security. We have a need to make sure we get these trade rules right,” he said.

On 16 May, the US imposed a ban on Huawei and 68 of its affiliates, preventing the company from importing components from American companies without government approval. Some of the affiliates are in other countries like Canada, Japan, Brazil, the UK, Singapore and others.

On Monday, Google announced it was cutting off Huawei's access to future updates of Google's Android and Google Play Store.

On Tuesday, the US Commerce Department eased some of the restrictions, allowing Huawei to maintain and update existing networks and handsets.

Trump also put in place a ban on the use of equipment from Huawei and its fellow Chinese firm, ZTE, within the US but that would not have much effect on either firm as the US uses very little equipment from either company.

More in this category: « ARM latest firm to suspend business with Huawei; Intel mum New China cyber security law could be used to block US firms »
Share News tips for the iTWire Journalists? Your tip will be anonymous