South Australia to collaborate with Canberra on myGovID 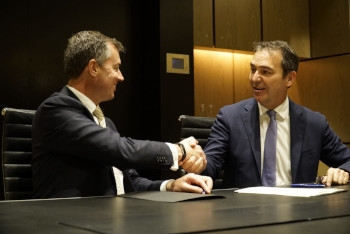 South Australia has become the first state to agree to collaborate with the Federal Government on the digital identity initiative known as myGovID, a trial of which is being run by the Digital Transformation Agency.

The agreement was made on the sidelines of the second Australian Digital Council meeting held in Adelaide on Friday.

The meeting was chaired by Human Services and Digital Transformation Minister Michael Keenan and attended by Steven Marshall, premier of South Australia, and ministers Victor Dominello of NSW, Gavin Jennings of Victoria, Mick de Brenni of Queensland, Chris Tallentire of Western Australia, and Mick Gentleman of the ACT.

Said Keenan: "The Commonwealth is already well advanced with the development of its own digital identity solution, known as myGovID, which is the equivalent of 100-point online ID check that will make it easier for Australians to prove who they are when accessing our digital services.

“The agreement reached with Premier Marshall will enable us to share our technology and our research with South Australia to help it accelerate its own program and ensure we develop nationally consistent systems.”

A number of key data collaboration projects were identified by the ministers who agreed to publish a report on the "state of the data and digital nation" early next year.

The early findings of a pilot to simplify the registration of births was examined; this looks at using hospital records to create a birth certificate, Medicare registration and, potentially, a Centrelink record.

A second pilot was agreed on in order to streamline the process to add death notifications.

Another project discussed was to streamline engagement with the government associated with gaining employment. The ministers also agreed that business processes could be simplified by leveraging the work already done in other jurisdictions.

Agreement was reached to explore a pilot project between the Federal Government and WA to share data on children with birth defects and medicines prescribed to pregnant women.

The ministers also agreed to go forward with a pilot to build a data asset to improve services for the disabled. This will initially use data from South Australia, NSW and the Federal Government.

The council agreed to meet again early next year.

More in this category: « US accused of 'rogue' tactics over Huawei CFO arrest Business as usual for crims under encryption laws: security pro »
Share News tips for the iTWire Journalists? Your tip will be anonymous