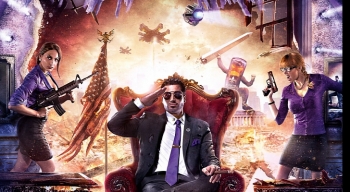 Controversial upcoming video game Saints Row 4 has remained banned in Australia after a review found the game's 'drug use' was not permissible.

The Australian Classification Review Board announced last week that it would be taking another look at the game, which had been initially given a Refused Classification rating by the board as we reported last month.

That decision caused much uproar in the local gaming community (and in the comments of our website), as the game had been banned for its "visual depictions of implied sexual violence, which are not justified by context" and "elements of illicit or proscribed drug use related to incentives or rewards".

The Board said in a statement that the game would be banned for its depictions of drug use, but didn't mention the previously cited sexual violence.

"In the Review Board's opinion, Saints Row 4 could not be accommodated within the R18+ classification, as drug use related to incentives and rewards is not permitted," the statement said.

Meanwhile an edited 'Australian Edition' of the game was submitted to the Classification Board last month and has yet to be given a rating.

More in this category: « The 'Australia Tax' - how vendors are ripping us off Huawei hunting Australian ICT companies »
Share News tips for the iTWire Journalists? Your tip will be anonymous