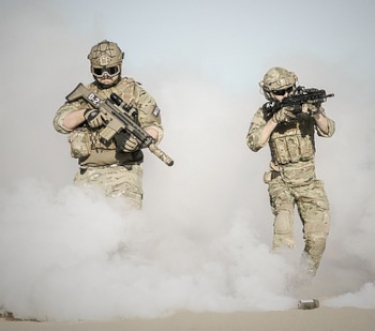 Microsoft has won a contract which could be worth US$21.88 billion (A$28.58 billion) with the US Army to supply 120,000 custom HoloLens augmented reality headsets that will help soldiers who are at war.

Prototypes of the Integrated Visual Augmented System were supplied to the army under a US$480 million deal signed in 2018. The new contract involves the supply of devices that can be used in the field.

"The IVAS headset, based on HoloLens and augmented by Microsoft Azure cloud services, delivers a platform that will keep soldiers safer and make them more effective," Alex Kipman, a Microsoft technical fellow and the person who introduced the HoloLens in 2015, wrote in a blog post.

"The program delivers enhanced situational awareness, enabling information sharing and decision-making in a variety of scenarios. Microsoft has worked closely with the US Army over the past two years, and together we pioneered Soldier Centred Design to enable rapid prototyping for a product to provide soldiers with the tools and capabilities necessary to achieve their mission."

But workers at the company have objected to "the creation of technology for warfare and oppression", according to a petition sent to Microsoft chief executive Satya Nadella and president Brad Smith in February.

On behalf of workers at Microsoft, we're releasing an open letter to Brad Smith and Satya Nadella, demanding for the cancelation of the IVAS contract with a call for stricter ethical guidelines.
If you're a Microsoft employee you can sign at: https://t.co/958AhvIHO5 pic.twitter.com/uUZ5P4FJ7X

The workers said they were alarmed that the company was working to provide weapons technology to the US military.

They said the contract was intended to "rapidly develop, test and manufacture a single platform that soldiers can use to fight, rehearse and train that provides increased lethality, mobility and situational awareness to achieve overmatch against our current and future adversaries".

The workers, who did not provide either their number or who they were, called for cancelling the IVAS contract, stopping the development of all weapons technologies and drafting a publicly accessible acceptable use policy to clarify this commitment, and appointment of an independent, external ethics board which could enforce and validate compliance with an acceptable use policy.

This contract is the second big deal that Microsoft has secured with the military. In October 2019, the company was awarded a US$10 billion (A$13 billion) cloud contract by the Pentagon.

However, Amazon Web Services obtained a stay from a court to stop Microsoft and the Department of Defence from continuing to work on implementing the deal.

AWS, which was heavily favoured to get the contract, claimed that former US president Donald Trump had influenced the awarding of the same.

The workers said that Smith's suggestion about redeploying employees working on unethical projects did not take into consideration the fact that they were not properly informed about the use of their work.

"There are many engineers who contributed to HoloLens before this contract [the US$480 million deal] even existed, believing it would be used to help architects and engineers build buildings and cars, to help teach people how to perform surgery or play the piano, to push the boundaries of gaming and to connect with the Mars Rover [RIP]," the petition said.

It added that these engineers would now be unable to decide about something they had worked on and would find themselves implicated as war profiteers.

Microsoft employees have protested in the past whenever the company has got involved in what they consider to be unethical projects.

In 2018, some employees called for a halt to a contract with US Immigration and Customs Enforcement when it emerged that children were being separated from their parents at the US-Mexico border by the agency.

Workers at the Microsoft-owned source code repository GitHub made a similar demand. The US has troops deployed at more than 800 bases all over the world, according to the book Base Nation.