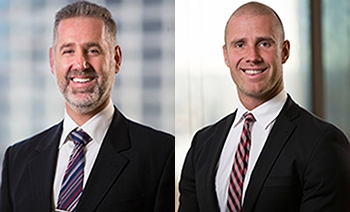 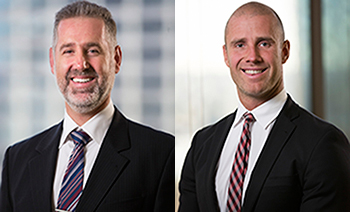 Lawyers at one of the oldest specialist intellectual property firms in Australia and New Zealand have slammed the High Court's decision to refuse leave to a patent applicant to appeal a decision by the Full Federal Court of Australia.

Jack Redfern, a principal at Shelston IP, (above, left) said this decision had left people who had prospective software patents to deal with the resultant disarray and uncertainty.

He added that the decision was at odd with the federal government's stated agenda of encouraging innovation in order that Australia could get ahead and improve its international standing as a place where new ideas would thrive.

In the case in question, RPL Central applied for a patent on a software platform that enables users to input Recognition of Prior Learning information, via an online 'question-and-answer' process.

Shelston IP associate Matthew Ward (above, right) told iTWire that when the patent application was made, a commercial competitor, Myall Australia, had opposed it on the grounds that the invention was neither new nor inventive.

To obtain a patent, an individual or a company makes an application to IP Australia, a government body authorised to act in this regard. After a patent examiner approves a patent application, there is a three-month window for third parties to oppose it. They have to produce their own evidence and arguments against the patent application. The odds are typically stacked in favour of the applicant.

Ward said while IP Australia found that RPL's invention was both new and inventive, they blocked it on "anti-software" grounds which were not raised by the commercial opponent.

The patent in question was for a computerised method of updating one's qualifications in order to submit them to educational institutions. Different institutions require different sets of documents for evaluating the possibility of granting a prospective student admission, and RPL's system was designed to take the headache out of the process of collating these qualifications together and then submitting them to an institution.

Ward said Shelston had no involvement in the case and could therefore comment freely about it.

"What we see here is the patent office, with unlimited taxpayer funding, going to great lengths to prevent a relatively small software company from protecting its innovations," he said.

"RPL sought to protect a particular form of computer interface for helping its customers manage their RPL data, which gave them a competitive advantage in the market; now any other third parties are free to directly copy the functionality of their interface. RPL's website is no longer online, so I am not aware whether they are still functioning commercially."

Ward added that this was an unusual case. "Usually, in an appeal against opposition to a patent, the battle is between two commercial parties. Here, one of the commercial parties did not wish to pursue the matter in court. Usually, that would be the end of the story, but here the patent office was determined to block the patenting of RPL's business-related software."

Redfern told iTWire: "The approach by IP Australia of attacking, at its own volition, innovative Australian software companies, is particularly confusing and concerning when viewed in the light of the Prime Minister's recent announcement of a $1.1 billion innovation plan that is focused on encouraging risk and digital literacy.

"It is clear the government understands that there is not only a great need, but a great benefit, in having Australians embrace digital innovation and development. Hence my statement in the press release that it may be time for the legislature to step in and stop the executive and judicial branches of government undermining its plan."

Additionally, the court decision on the patent followed what the two Shelston IP lawyers described as the relatively new practice of deciding special leave applications on written submissions with no oral hearing.

Ward said this practice had begun in the last year or so. "It is purely for efficiency, given the number of matters being appealed to the High Court (across all areas of law)," he said.

"There are very few patent matters appealed to the High Court. It is a real pity, because the High Court hasn't ever extended patentability rules to apply to computer-implemented inventions. Other than in the context of "gene patents", they haven’t substantively considered this area of law since before computers were in common use."

Ward pointed out that patents did not protect software code; they protected software functionality. "So, it's not that anyone is free to copy RPL's code. Rather, a competitor is free to look at RPL's web interface, decide 'that’s a really clever and innovative way of doing things', and copy the same thing. A good example is eBay; they have an auction and a 'buy it now' feature. That's really neat functionality which makes eBay better than other auction sites, and was actually the subject of a lengthy patent dispute in the US, though in that case it wasn't eBay that owned the patent."

"A lot of people are worried that software patents can inhibit them in terms of how they code software and wok on their own projects; in reality the real purpose is to prevent copying of other people's clever functionality-related inventions.

"My take is that, if somebody comes up with a new software product or feature, which would allow them to advance their business interests, then they should have some protection against their competitors simply copying. That's why we have patents.

"Think of the start-up sector. There are so many brilliant app developers in Australia coming up with amazing new apps. By having patent protection, they create opportunities to raise capital and/or exit by being acquired by a larger player. Without software patents, there is no reason for anyone to invest or purchase; they can simply develop the same thing in-house and compete."

iTWire asked IP Australia for its take on the issue and a spokesperson responded: "In administering the Patents Act, IP Australia has an obligation to grant patents consistent with the law including whether the patent is for eligible subject matter. In this regard, there are a range of activities, ideas and innovations that the patent system is not designed to cover. For example, financial and business schemes are excluded no matter how innovative they may be considered.

"Where IP Australia makes a decision rejecting the subject matter of a patent or patent application, the applicant or patentee has a right to appeal. If so, IP Australia also has the right to defend its decision if it considers it is correct at law. This is what happened in the case involving RPL Central Pty Ltd.

"Ultimately the Full Federal Court found that IP Australia’s decision was correct and leave to appeal was refused by the High Court. The High Court considered the Full Court’s decision 'plainly correct'.

iTWire also asked whether the organisation had any comment on why it decided to get involved, using taxpayer money, to block a patent, when Malcolm Turnbull's federal government has been shouting itself hoarse about innovation ever since it took over about six months ago.

More in this category: « eInvoicing could save Australia $7-$10 billion annually AFP raids on ALP offices show dangers of data retention: Snowden »
Share News tips for the iTWire Journalists? Your tip will be anonymous