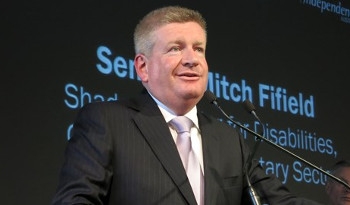 The Coalition Government will introduce changes to the copyright law on Thursday, to give creative industries what it calls "even more powerful weapons" to fight copyright infringement by sites based outside the country.

In a statement, the government said the Copyright Amendment (Online Infringement) Bill 2018 "strengthens the existing, successful website blocking scheme, introduced by the government in 2015, by allowing more pirate websites to be targeted and making it harder for pirates to circumvent blocking measures".

Under existing law, the Federal Court can issue instructions to ISPs to block this website or that. The amendment aims to bring more overseas sites and file-hosting services within the scope of the law and make it possible for proxy and mirror sites to be blocked quickly.

Communications Minister Mitch Fifield said: "Online piracy is theft. Downloading or streaming a pirated movie or TV show is no different to stealing a DVD from a shop.

“The government is providing enormous support to creative industries, including through small business tax relief and our Location Incentive program. We can’t have that good work undone by allowing local creators to be victims of online piracy.

“We are always looking at what more we can do, and we want copyright owners to have the right tools at their disposal to fight online piracy.”

“Site blocking is the most effective remedy available to content creators in Australia today, but piracy continues to cause significant harm to creators," he claimed.

Paul Muller, chief executive of the Australian Screen Association, which says it represents the film and television content and distribution industry in Australia, said: “Site blocking has proven to be an effective tool, resulting in a 25% reduction in piracy volume in Australia, but there are weaknesses that need to be addressed.

"Some of the bigger blocked online locations continue to attract hundreds of thousands of page views through the use of proxies and alternative domains. This bill however, will go a long way to address those concerns, and will help to reduce copyright infringement even further.”

Michael Hawkins, executive director of NACO, which claims to act in the interests of all cinema operators, said: “We would like to thank the Morrison Government and the Opposition for its leadership and continued support of the Australian creative sector.”

More in this category: « Encryption bill will cause 'significant risk' to Internet: Mozilla DTA, cyber expert at odds over GovPass analysis »
Share News tips for the iTWire Journalists? Your tip will be anonymous