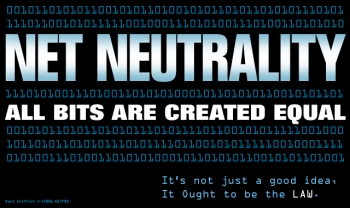 The US Federal Communications Commission (FCC) has proposed new rules on Internet charging which will effectively mean the end of net neutrality.

Net neutrality – the idea that everybody using the Internet is treated equally and charged the same – will soon become thing of the past.

It is under attack around the world by powerful interests that will, most likely, kill it. Indeed, and argument could be made that it is already dead. It certainly will be if the FCC’s latest proposals are adopted.

The FCCC lost a court battle in February against telco Verizon, which successfully argued that the Commission did not have the power to enforce net neutrality. Now it is trying a different tack, but the effects are not exactly what proponents of net neutrality are looking for.

The FCC’s new chairman, Tom Wheeler, is a former lobbyist for the telco industry, and seems to have their interests at heart rather than those of US consumers. The FCC claims to be in favour of an open Internet, but the changes it is proposing would lead to anything but.

Wheeler is proposing a ‘fast lane’ on the Internet for content providers who pay ISPs more money. Wealthy and high traffic sites, such as YouTube and Netflix, will be legally allowed to pay ISPs to deliver their content at higher speeds.

This will not be directly charged to users – which is why the FCC says it is not a violation of net neutrality – but it means that content providers and others with the deepest pockets will be able to ensure their content is delivered at a higher speed.

Critics point at that such a regime will favour them in the marketplace, forcing out those providers who can’t or won’t pay what amounts to extortion money, and that all the costs will in any case be passed on to consumers at the end.

Wheeler says there has been a “great deal of misinformation” about his proposals. Writing in the FCC’s blog he says they do not “change the underlying goals of transparency, no blocking of lawful content, and no unreasonable discrimination among users.”

He says in a blog defending the proposals that they would establish that “behaviour harmful to consumers or competition by limiting the openness of the Internet will not be permitted. Incorrect accounts have reported that the earlier policies of the Commission have been abandoned.

“The Court of Appeals made it clear that the FCC could stop harmful conduct if it were found to not be ‘commercially reasonable’. Acting within the constraints of the court’s decision, the proposed rules establish a high bar for what is ‘commercially reasonable’. The Commission believes it has the authority under Supreme Court precedent to identify behaviour that is flatly illegal.

“The allegation that it will result in anti-competitive price increases for consumers is unfounded. That is exactly what the ‘commercially unreasonable’ test will protect against: harm to competition and consumers stemming from abusive market activity.”

Wheeler then summarises the FCC proposals:

1. That all ISPs must transparently disclose to their subscribers and users all relevant information as to the policies that govern their network

3. That ISPs may not act in a commercially unreasonable manner to harm the Internet, including favouring the traffic from an affiliated entity.

Wheeler, according to most analysts, is being disingenuous here. Those are not the issues. The real problem is his proposal to allow ISPs to offer, at a price, a ‘fast lane’ to anyone prepared to pay for it. He does not mention this key aspect of the proposals in his blog.

The press and communications analysts in the US are up in arms over the FCC proposals, which will be considered, along with public submissions, in the middle of May.

“If it goes forward, this capitulation will represent Washington at its worst,” said Todd O’Boyle, program director of Common Cause’s Media and Democracy Reform Initiative, quoted in The New York Times. “Americans were promised, and deserve, an Internet that is free of toll roads, fast lanes and censorship — corporate or governmental. If the new rules deliver anything less, that would be a betrayal.”

Tech columnist for Time magazine, Jared Newman, expresses it thus: “Under new rules proposed by the FCC, Internet service providers such as Comcast and Time Warner Cable could ask your favourite sites to pay for special treatment. Companies that refuse, or who can’t afford to pay, could be stuck with slower speeds or more congestion compared to companies in the fast lane.

“The next Netflix or YouTube could still exist as it does today, but without enough extra capital to pay the gatekeepers, it could be at an inherent disadvantage to incumbent services or services with deep pockets.

“Put another way, the FCC plans to take an axe to net neutrality, the idea that all websites and services should be treated fairly.”

The battle is not over, but with the FCC now siding with the telcos, it is hard to see it being won.

More in this category: « Qkr to quickly transform payment systems in Aussie schools Putin says Internet a CIA plot »
Share News tips for the iTWire Journalists? Your tip will be anonymous