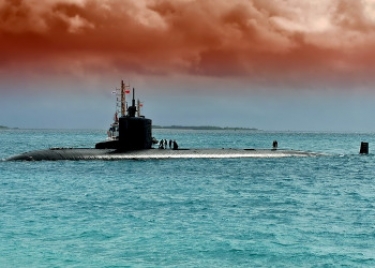 Australia's decision to buy nuclear submarines, the so-called AUKUS initiative, has been guided mostly by ex-US Navy admirals who have potential conflicts of interest, the Washington Post has revealed in a detailed investigaton.

Former senior Defence executive Mike Scrafton asked, in a piece for Pearls and Irritations, a blog run by ex-Australian public service veteran John Menadue: "What confidence can Australians have in the soundness of this opaque, over-priced, strategically unjustifiable, and massively under-specified project?"

Unsurprisingly, Menadue's blog was the lone Australian outlet to report the Post's investigation, as the mainstream media tend to generally sing from the government's songsheet.

The investigation "found that the former US Navy officials have benefitted financially from a tangle of overlapping interests in their work for a longtime ally of the United States".

"Some of the retired admirals have worked for the Australian Government while simultaneously consulting for US shipbuilders and the US Navy, including on classified programs," the report, by Craig Whitlock and Nate Jones, said.

And one of these ex-admirals was forced to quit in 2022 as a part-time submarine consultant to the Australian Government due to a potential conflict of interest over being board chairman of a US company that builds nuclear-powered subs.

Details of the American officials' involvement has been kept secret by the powers in Canberra, and the Post obtained its information through FOIA requests to the US Navy and US State Department.

Clearance from the US Navy for these ex-officials to work for Australia was given speedily, with three getting clearance in less than a week. Two of them applied for work with Australia less than a month after they retired.

"In addition to the six retired US admirals, the government of Australia has hired three former civilian US Navy leaders and three US shipbuilding executives," the Post report said.

"Since 2015, those Americans have received consulting deals worth about US$10 million (A$15.7 million) combined, according to Australian contracting records posted online."

Recommendations made by the American advisers have led to Australia deciding on a nuclear submarine deal which will leave the country without any submarines when the Collins-class boats long retired, until the new boats arrive in 2040.

As the AUKUS deliberations continue to decide on what subs Australia will order — the British Astute class or the American Virginia class — retired US admirals William Hilarides and Thomas Eccles are being paid to be advisers on a six-member panel. The Post said it was more likely that the American boats would be chosen.

Eccles has been paid US$825,000 for four consulting gigs since 2016, according to figures taken from Australian records.

There are two other Americans on the panel: Gloria Valdez, a former Navy deputy assistant secretary responsible for shipbuilding, and Navy ship design expert Howard Fireman.

The Post report is well worth a careful read by all Australians who should understand where their taxpayer funds are being used and how.

Scrafton questioned how much the Americans had influenced the junking of the contract with France, signed by former prime minister Malcolm Turnbull, an incident that led to a major souring of ties with Paris.

"What remains unclear now is the extent to which the abandonment of the French submarine and the decision to pursue a nuclear powered version was influenced by the Americans," he wrote. "The dramatic shift to the AUKUS project casts the role of the ex-US officials in a different light."

He said Australia's security was the highest responsibility of government – as politicians tended to say often.

"Yet, in the submarine case it appears Australian governments have been prepared to delegate this responsibility to a highly paid group of foreigners.

"The tenor of [Labor] Defence Minister [Richard] Marles’ comments on strategic policy in office, however, indicate that the Albanese Government is as comfortable with this as its predecessor. A public review of the Australian requirement for a submarine in needed."

More in this category: « ACS welcomes budget, says it will boost diversity in IT industry AMTA welcomes Australian Federal Budget’s network infrastructure investment »
Share News tips for the iTWire Journalists? Your tip will be anonymous