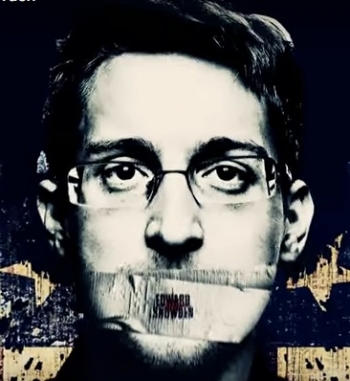 Banished NSA whistleblower Edward Snowden has warned that Australia has gone further down the slippery slope of unfettered mass surveillance than even the US. Yesterday Snowden pointed to the recent raids by the Australian Federal Police on the offices of senior ALP parliamentarian Senator Stephen Conroy and a staffer of Opposition communications spokesman Jason Clare to illustrate the potential danger of using retained metadata for nefarious political purposes.

In 2015 the current LNP Government and representatives embarked on a campaign to sell mandatory data retention to the Australian public, with rhetoric centred on its necessity to curb dangerous criminal activities such as terrorism.

Speaking by satellite in a video link to a packed auditorium in a Melbourne event staged by Think Inc, Snowden pointed to the use of metadata by the AFP to find the sources of journalists' articles about NBN cost overruns as a stark example of how the Australian data retention laws have already been misused for political purposes.

“It is ironic that Prime Minister Malcolm Turnbull was Communications Minister at that time (when cost overruns occurred),” said Snowden.

According to Snowden, the rhetoric used by advocates of mandatory data retention, increased government surveillance and laws weakening personal privacy is disingenuous at best and maliciously mischievous at worst.

Snowden, invoking his credentials as a security expert, claimed that there has been no evidence that mass surveillance is effective in preventing terrorism or other criminal acts.

“In all my time with the CIA and NSA, there has not been any evidence that a single terrorist incident has been been prevented.”

Snowden also said that not a single life had been lost as a result of his whistleblowing activities.

When asked by a member of the audience if he would support mass surveillance or mandated data retention if it was shown to be effective, his answer was an emphatic no, saying that you could also make the case that plucking suspects off the street and murdering them was effective.