Review: Lara Croft and the temple of Osiris 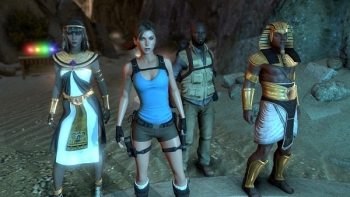 Lara takes her two impressive,,, guns into a isometric Egyptian themed co-op adventure.  Lara Croft and the temple of Osiris.

In the supernatural puzzle adventure Lara Croft and the temple of Osiris Lara must team up with her rival tomb raider Carter Bell as well as the reincarnated Isis and Horus to gather together the pieces of Horus’ dad Osiris who is the only god at hand that can stop Set – king of the underworld – from enslaving mankind.

Thankfully the game does not delve too deep into the body-parts involved in the original Egyptian mythology, although I did smirk – in a schoolboy way – at the fact that the team need to utilise the “Staff of Osiris” in order to proceed through the game.

This is an isometric view puzzle action game.  In fact, there are far more puzzles here than in the last full Lara Croft action game – excellent as it was – that Square Enix released in 2013, so fans that thought that was a mistake should be pleased here. 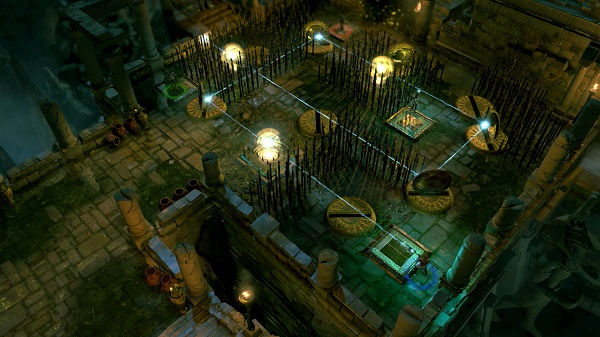 Lara wanders the landscape looking for tombs to enter.  Some tombs provide a deep puzzle challenge based on physical solutions, whilst others may be larger more action driven adventures culminating in mini boss fights.

The game is fully playable solo, with Lara capable of wielding the tools needed to solve tomb puzzles and weapons to take on Set’s minions along the way.

Tomb puzzle elements are relatively simple in number but can be combined in multiple ways.  For instance Lara might need to roll a giant ball into a receptacle in order to open a portcullis.  However, to get the ball to the right area Lara might need to float it down a series of culverts, or perhaps lay a mine (probably the handiest weapon she owns) under the ball to detonate and launch the ball over a small wall.

Whilst this is fun, teaming up with one, two or three other friends for couch co-op is more fun.  Each puzzle tomb, as well as equipment configuration of each player will alter slightly when characters alongside Lara enter the play.  This can make a slightly hard tomb easier, or indeed have the opposite effect of making a tomb harder to negotiate.

Either way, co-op is the order of the day.  It could be a matter of one or more players blasting away at the various enemies while another party contingent goes about the job of manipulating the environment to allow progression.  Or, possibly it is a multiplayer approach needed to trigger the required tomb mechanisms.

Overlooking the atrocious voice acting in the game, and the somewhat short length of the experience, Lara’s adventures in the Temple of Osiris does have an element of charm and at times that hi-five co-op fun that is rare to find in a world of primarily online-only experiences.

Should I buy it?  To be honest there are plenty of other games out there offering the puzzle experience found here, but if you are a fan of Ms Croft, and have some buddies you can invite around then go for it.

More in this category: « Review: The Crew Review - Mahabharat Warriors for Android »
back to top