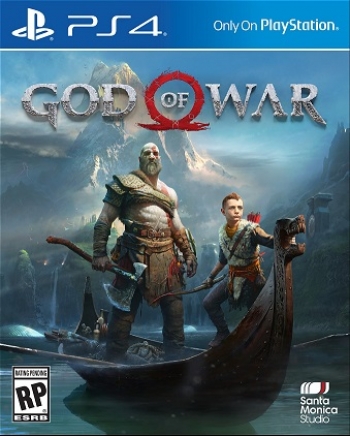 Firstly, it has to be said, this game is beautiful to behold. If you happen to be equipped with a PS4 Pro, 4K television capable of HDR then you are in for a treat.  In particular that High Dynamic Range feature will get a workout as the game takes you across snow-capped vistas and many other brightly lit environments to really sugar-coat the retinas with saccharine eye-candy.

Previous GOW games took us through the ancient world of the Greeks, but as mentioned earlier, Kratos had kind of exhausted that mythos. Instead, and initially unexplained, Kratos is found, older and bearded and saying good bye to his (new Nordic !) wife Faye, in his indelible silent way as he lights her funeral pyre. We are introduced to Kratos’ son Atreus – a young, somewhat sickly boy who, according to Kratos at least, needs some tough-love guidance.

Rather than just taking on Titans and Gods and the like in vengeful violence, this God of War is all about the dying wishes of Faye, to have her ashes scattered over the realm’s largest mountain.

This — as you would expect — turns out to be harder than it looks. Kratos embarking on a Cormac McCarthay’s The Road, or if you wish, a more PlayStation style reference, The Last Of Us like parent-child relationship-building journey.

The game is set in the frozen Nordic landscape. However, the range of beautiful (with that beauty, sometimes in the design rather than colour palette) locations is exquisite.

The game is essentially one long camera shot (with background loading times cleverly covered up, apart from the rather strange fast-travel experience) so the player can easily lose track of time through extended immersion sessions. Kratos and Atreus will exchange stories whilst paddling around the waterways of the realms and encounter landscapes and locales of great variety and scale.

This is a game however and God of War has never really been about paddling boats and telling tales, it is about the fighting. And here this game can truly come into its own.

Gone are the iconic Blades of Chaos – replaced by the Leviathan Axe, reminiscent of Thor’s Hammer that can be thrown, cause enemies frost damage, and then return to Kratos’ outstretched hand on command, in a really cool, arching and heavy feeling way.

Like any good 2D fighting game, players will need to master combos in combat. Putting together sequences of shield, axe and bare-fist blows along with Atreaus commands to shoot his bow, Kratos can take down the mightiest of foes.

Largely gone from this game are the quick-time events of previous GOWs. Instead, players will be consulting the bestiary — maintained by Atreaus as the pair learn more about their enemies — for tips on how best to tackle the mythic adversaries.

Fighting is satisfying, though I found the shield not as responsive as I would have liked. Each weapon and move can be upgraded by spending experience points in a number of “skill trees” including Atreaus’ combat skills as an AI driven ally.

Some enemies will engage Kratos in dialogue, there are some famous Nordic characters to engage and strategies need to be devised, but either way, Kratos will endure and overcome in the most blood-quenching way. This is after-all, God of War.

Talking about thawing, Kratos remains largely stoic in his emotions. It is a slow burn as he finds himself questioning his pragmatism towards parenting. Conversations with Atreaus slowly draw out just how much Kratos cares for his dead wife’s son, but the game takes it’s time to break through his emotional carapace.  This is the beauty of telling a tale through video-game format; taking fifty hours to do what needs to be done in the two hours available to a filmmaker.

Bear McCreary (The Walking Dead, Outlander) handles the score here, and given there are long moments of silent soul-searching looks with Kratos, it is the music that tugs at the heart-strings of the players. And effectively so, particularly if said player is the parent of a child the age of Atreaus.

This GOW should also be applauded in a general sense for the aural experience. For example, footfalls over the various surfaces of the game are masterful, from the slosh through water, to jogging through snow drifts or over ethereal light-bridges, it all feels real despite the setting.

When a conversation are had with the gigantic World Serpent, your headphones, or TV speakers will make noises the designers of that equipment never envisaged. It is fantastic.

This is a brilliant game – we have not even touched upon the systems in the game. Weapons and armour can be upgraded, with a relatively socketing system in play.

The two dwarf brothers who set up “shops” around the realms are both funny in their dialogue, and helpful in their information and smithing talents.

Kratos can augment his strength and defence, as well as a smattering of other attributes, via crafted, upgraded or found equipment and it all layers into a system that initially seems complicated, but is actually quite easy to employee.

Taking inspiration possibly from recent reboots of the Tomb Raider series, Kratos now has to break out of his linear path through life of violence upon violence and work out some environmental puzzles. Combining the freezing attributes of his Leviathon Axe, and upgrades to Atreaus’ bow, there are plenty of conundrums the designers have laid in the path of the duo.

There is plenty of opportunity to explore side missions — something Kratos does begrudgingly — and there is not much left out in this game, while there is back-tracking across the geography, the game makes each location feel fresh by exposing new options and layouts.

God Of War is a wonderful exclusive to the PlayStation brand, a must-have for the library of both fans of the series and newcomers alike. A difficult to put-down masterpiece of the video-game medium.