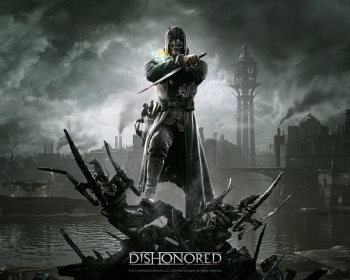 Dishonored is a new IP from the same production stable as Skyrim, but the influences here are Deus Ex, Half Life 2 and Thief.  Big influences indeed, but Dishonored manages to be its own beast, at times disquieting, at others tense or frustrating but overall very satisfying.

Dropping you into a well-constructed universe of oppression in a 19th century style fusion of English and Eastern European cultures Dishonered tells the tale of Corvo, framed for the death of the Empress and the kidnapping of Princess Emily.

Where Corvo was once the trusted protector of royalty, now he must join the underground movement to clear his name and rescue Emily from the oppressive regime that has emerged in the power vacuum left after the Empress’s untimely demise.

Corvo dons a specially constructed mast, learns the magical assassin abilities of rune based powers and is sent on a number of missions to right the wrongs of the recent past.

Whilst much of the Dishonored tale is delivered through cut-scene interaction, it is fleshed out further by reading books and notes scattered throughout the environment.  Unlike games that do a similar thing, these bits of text are worth reading, clues are given that lead to figuring out puzzles or alternatives paths to accomplish objectives. 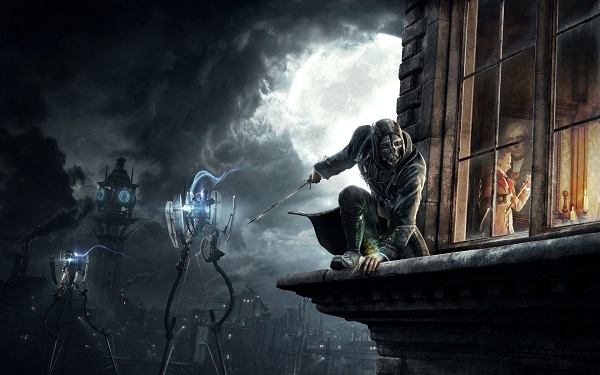 Game-play itself is played out in first person, and depending on how you want to tackle each objective, could take an hour or two each mission (including saving often, and reloading).  In the tradition of games such as Thief, or Deus Ex, you can tackle objectives in a variety of ways; primarily sneaking around, or going in crossbows blazing (that is indeed possible with incendiary bolts).

Amongst the plague ridden streets of Dunwall, there are plenty of pathways, both high and low, and with Corvo’s Blink (teleport) ability, even more options can appear.  But be careful, stumbling into view of a masked Overseer, or landing near some hungry plague rats and in no time it could be the reload screen you see.

Dishonored certainly gives you the tools to take a violent, sneaky or mixed approach to each situation.  If a body is discovered (whether dead or unconscious) the alarm is raised, so it is important to equip yourself with a robust defense or hide bodies effectively.

Carved whalebone charms can enhance Corvo’s abilities, and found Runes can be exchanged for all new magic skills such as seeing through walls, slowing time, possessing animals and humans and more.  These can be combined in inventive ways to get passed the navigational, or AI protected puzzles the game throws in.

“We wanted to create a very physical first-person action game that encourages players to play the way they want by providing them with versatile game systems”  said Raphael Colantonio, President, Arkane Studios. “We’ve watched gamers play Dishonored at consumer events and we've seen some amazing gameplay choices and power combinations. We’re very proud of our development team’s final product, and excited to see the game in the hands of gamers.”

“The team at Arkane Studios set out to create an original game with a deep story, set in an immersive world, full of player choice…and they have delivered on all aspects,” said Vlatko Andonov, President, Bethesda Softworks. “We couldn’t be more proud of Dishonored and can’t wait for fans to finally get their hands on it.” 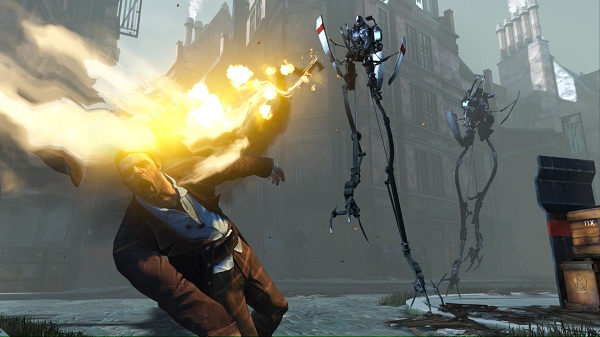 Apart from the supernatural abilities, Corvo has access to the resistance’s gadget guy, where his mask and weaponry can be upgraded.  It is a somewhat subdued upgrade system, but suffices within the bounds of the game.

The washed out style of graphics portray a vividly bleak environment to explore, the character models, whilst bordering on comic with their oversized hands and exaggerated facial constructs, have enough variety of animation (though it is wooden in implementation) and expert voice acting (including Susan Sarandon, Carrie Fisher and Brad Dourif) to pull the whole 19th century City 17 vibe together.

The atmospheric gadget, the mechanically altered human heart, builds up the universe of Dishonered, giving insight into the denizens of Dunwall and helping the player decide where to go, and in some cases how to act.  Blazing through a level as an unstoppable killer, is hard because ranged ammunition is difficult to find, and the hand-to-hand combat system tricky to master.

Furthermore, the more bodies, the darker the game gets, and more rats and Weepers (zombie like plague victims) appear in the game.

Sneaking around also takes talent, though it is a different skill set.  Whilst there is a guiding beacon to the next most obvious objective, finding a safe way there (particularly without the normal video game trope of a mini-map) will take a level of street smarts not normally inherent in game design today.

Taking an hour or two to complete an objective is not unheard of, and to successfully pull it off is satisfying to the core.  Dishonered gets two thumbs up for game-play choice, design and execution.  If you feel the need for a game in an interesting setting, with choices that take skill beyond the ‘twitch’ and games such as Assassin’s Creed don’t really do it for you, then consider the world of Dishonered.

More in this category: « Halo 4 – is it still Halo without Bungie? Who Karted? »
Share News tips for the iTWire Journalists? Your tip will be anonymous