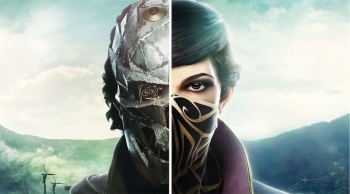 One of the most revered games of all time was Warren Spector’s Deus Ex. The reason was just how refreshing the approach of a multi-solution game design was among a sea of assault style shooters. That was in 2000; since then many other titles have given players options, and some have been intriguing, such as the original Dishonored, and now we have Dishonored 2.

……and really, it is more of the same.

This is largely a good thing though. For fans of the original, rather dismal setting of Dishonored, there will be joy in knowing that whilst the story moves on from the rat-infested streets of Dunwall, the gloomy nature of the Dishonored 2 universe remains.

Set 15 years after the (multiple) endings of the original game, Empress Emily Kaldwin has been usurped by a mysterious “aunty”, and must flee to the southern port town of Karnaca in an attempt to unravel the situation and retake the throne.

That is of course if you decide to play as Emily. You could play as the original protagonist; Corvo Attano. Having played through the original game we decided to try Emily, and she has a mean streak about her.

This game is brutal in its presentation. Emily can, if she wishes, dispatch her (former) subjects in very nasty and inventive ways. It is actually quite difficult to aim for a low-chaos (ie. Low body count) result for each mission, as sometimes grabbing a guard and knocking them out, might result in them doing a fatal injury to themselves in the process.

For example, I had spent three hours sneaking through a large building on an island, about to exit and end the level (yes! You can spend that much time per mission). One guard stood in my way, innocently playing dice upon the stairs I wanted to ascend.

I struck him with a sleep dart, he keeled over asleep, unfortunately dropping the flammable bottle of spirits he had in his hand and immolating himself accidentally. Well, poop! I could have reloaded (you need to save often in this game), but I wanted to experience my story within this world, so I finished the mission, and saw the 1 death stat pop up on the screen.

Depending on how you want to play, Dishonored 2, like its predecessor, offers a lot of paths to success and failure, optional mission objectives with dubious or generous rewards and plenty of tension.

Pickpocketing or finding coins around each level can be spent on the black-market, if you can find a merchant, this is a departure from the original game where you knew exactly where you could get upgrades from.

Bonecharms can now be crafted, and this will give you another choice in how to play through the story. Essentially it is rather pointless to review this game, because individuals will each have an experience specific to themselves.

We spent a great deal of time skulking around, but this is a tough route, you just don’t know how civilians will react to a sword wielding, cloaked and masked figure emerging from the shadows. Some take it in their stride, others run and raise the alarm. That is annoying, and usually terminal, but can be invigorating and a heart-pumping challenge, flight or flee?

You could instead go in pistols blazing and murder everyone, though, this will also be tough. Ammo is limited, the fighting system not as precise as you would hope, and opponents are often skilled.

Either way, playing Dishonored 2 is a stressful, invested time that is marvellous to be involved in, if you are so inclined.

Sometimes you will be reading through an abundance of journals or newspapers, listening to audio logs or looking for collectibles to flesh out the story line.

At others, you will be working out how to get to seemingly out-of-reach places, exploring the extensive levels and simply immersing yourself in this grim world.

This is not Titanfall nor Call Of Duty, there will be frustrations until the game’s mechanisms and pathways are learnt. However, this is a great game for those that wish to roleplay. Not in the sense that there are stats to improve, more so in the decisions to be made. Dishonored 2 gives contains is set in a deep world and the player is armed with the tools to find out more.

This means you can listen in on conversations, find out more about the foes and friends around you, and perhaps decide, if you are in the mood, to take a non-lethal approach to removal, avoiding them altogether or just cut them down for the black-hearted folk they are.

We played on an Xbox One, and visually this game steps up the ocular candy. Each environment is littered with detail and detritus. Architecture is realistic and provides a traversal challenge whilst remaining realistic in its functionality.

Audio is ok, though not on par with the visuals. Playing with headphones should give one a better directional aspect to foes, but at times the extra footfalls that the player character seems to generate, and some mixed results in the surround sound distribution there was an extra, unintended layer of challenge to doing the Dishonored 2 sneak.

We still have a long way to go to complete this game, and will play through again as Corvo, but for now we are very glad to be back in the forbidding but imaginative world of Dishonored 2. You even, finally, get to see a whale.

More in this category: « Review: Titanfall 2 Single Player – this is a developer listening to fans Impressions: Watch Dogs 2 – L337 Hax0rz GTA »
Share News tips for the iTWire Journalists? Your tip will be anonymous