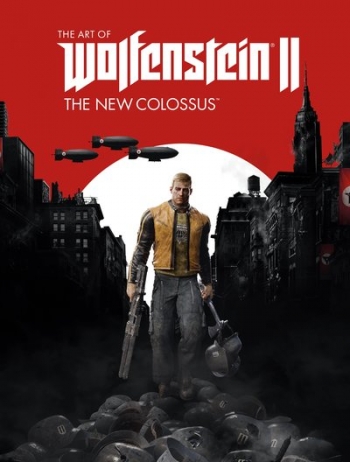 Wow! Just, Wow! Here is a piece of digital art wrapped up in an action game that tackles big issues in a way that is considerate, but perhaps irreverent. And it has Wolfenstein in its title.

Publisher Bethesda is knocking it out of the park at the moment with the artistic and quality choices it is making. Hopefully the gaming public will realise the gamble the company is taking and support games that are both high-quality but also, at least at a AAA release level, gently push the boundaries.

When Wolfenstein: The New Order rebooted the classic franchise in 2014, it was amazing that developer Machine Games was able to take the character of B. J. Blazkowicz — little more than a face depicting character damage in the original Wolfenstein 3D game — and, through brilliant writing and well-implemented voice acting, create a multi-layered personality as an identifiable and complex player avatar.

Well the team have stepped it up a notch here in the sequel Wolfenstein II: The New Colossus. Voice acting for all characters, including B. J., has improved and the writing and story line somehow tackle issues in a video game that, whilst completely over the top, could have resonance with today’s headlines.

B.J’s childhood gets explored, his relationship to his Jewish-heritage mother, and abusive and racist father is integrated into the alternate history tale of a successful US invasion by the Third Reich in a way that despite the absurd situations the player is about to face, come across with an emotional impact that will surprise even the most ardent gamer.

Throughout the campaign, the situations presented will leave you both laughing and perhaps thinking about just how absurd yet pertinent the metaphor of the situation is. It is so hard to write this without some spoilers, but to do so would spoil a great deal of the impact of the writing. I can do little more that draw people through a reluctant veil that may come over them due to the title of this game. Once you are in the stories grip, Wolfenstein II is a difficult game not to be consumed by.

However, the story is one thing, the game-play itself is another.

Playing through Wolfenstein II, the player will need to make a number of choices. One is simply a repeat of a choice made in the first of this (obviously) trilogy. Who will you save, and thus, which comrades storyline will be experienced through the course of the game?

But there are other choices that present themselves. All have dramatic effect on the experience of the game. One of these choices is quite simply the difficulty level.

Here is how this will play out for most people. The “normal” difficulty will be too hard, you will have the Nazi war machines stomp all over you, and you will drop the difficulty down a level. You may even drop the level down to the lowest.

More in this category: « Review – Spintires: MudRunner Federal Court confirms that Valve misled gamers »
Share News tips for the iTWire Journalists? Your tip will be anonymous