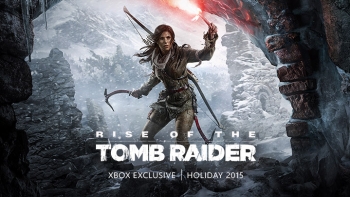 Buried deep under the temple of Fallout 4, the city of Call of Duty: Black Ops III, the ancient arena of Metal Gear Solid V and the great library of Halo 5 comes the second in Square Enix’s reengineering of Tomb Raider. Fans should dig enthusiastically and not let Rise of the Tomb Raider be consigned to a history lost.

The 2013 reboot of Tomb Raider by Crystal Dynamics and Square Enix was one of the most enjoyable experiences of that year, this follow-up keeps the quality up, adds more tombiness and generally lets us take Lara Croft through another action-packed adventure.

It is a little unfortunate that during one of the best year’s in gaming history Rise of the Tomb Raider is being released – exclusively on the Xbox One for a year – at a time when some other great titles are hitting shelves. It risks minimising the amount of eyes that will get a look at this very well crafted and fun-to-play game.

This time around Lara is spending her energies attempting to find redemption for her father, who before taking his life, was convinced of the existence of a lost hidden city full of artefacts of the “undying prophet”. This obsession was ridiculed by his peers and colleagues fuelling Lara’s quest.

And with that, it is off to eastern Russia (via Syria). Lara will spend a great deal of time in the frozen crags of Siberia, thankfully this time with a choice of outfits for protection against the elements. Lara will need to find hidden caches of equipment, deciphering ancient (and modern Russian for that matter) texts and discover hidden optional puzzle tombs along the way.

Fans of the original will recognise the cadence of game play here. Lara will be traversing the landscape (in a far more fulfilling game-play way than the Uncharted series), fighting her way up mountainous ridges, through dense forests and snow or down deep into the hollows of the earth.

She will need to think things through a bit, but we found the games puzzle traversal less challenging than the first title despite the addition of some timed platform requirements.

Don’t be fooled by those that say Tomb Raider has become an open-world game. Whilst there is a lot more incentive to backtrack across the map, and yes you can jump around between campsites, the story driven aspects still play out in a fundamental controlled linear way. Geography wise you are guided along the path (perhaps by spamming the “where do I go next” button a bit too much), but that is fine, it is a relatively intriguing story line Lara is pushing through, and it is nice to pace it at a velocity largely of the players devising.

The optional challenge tombs are much more numerous and interesting than previously. They are both large and small, with an encouraging payoff of both satisfaction and character reward once solved. This is what Tomb Raider is all about, exploration, wonderment, and a dopamine hit of reward.

Then there is the gun play and hectic action pieces. Lara can now improvise with items scattered around the environment, at one end of the scale distracting patrolling enemies from a hidden vantage point, or, at the other end, blowing them to bits with a made-on-the-spot Molotov Cocktail.

The shooting is very well implemented, Lara can change shoulder view at a click and unleash a bullet hell on a variety of, let’s face it, somewhat inept AI driven foes. It is satisfying and terrifyingly hard at times, particularly when creatures or enemies get too close too quickly.

Lara can unleash a variety of exotic arrows (once crafted) and pack a punch in close combat with her climbing axe. By the end of the game Lara is a combat beast.

This is still a brutal game both in visuals and game-play however, Crystal Dynamics has toned down the torture-porn to a degree from the first game. This is largely due to a differing story direction and an environment that allows for a great deal more stealth as an option to combat, and where any mishap in traversal results – more often and not – a Coyote (from the Road Runner cartoon) style plummet to death rather than the more gory depictions of Lara’s demise found in the first game.

Again, this is a top interactive entertainment experience, the story is enough to drive you on, the pacing of game play is top notch, there are some slight missteps that take the immersion away – camp sites in inexplicable locations and the strange shack-o-savings mechanic – but overall it is a real shame that PS4 and PC owners will not get to see Rise of the Tomb Raider for a year, and even Xbox One owners might overlook this excellent title.

More in this category: « Unfinished Game Review: Fallout 4 Review - Goldie Gems for iOS »
back to top