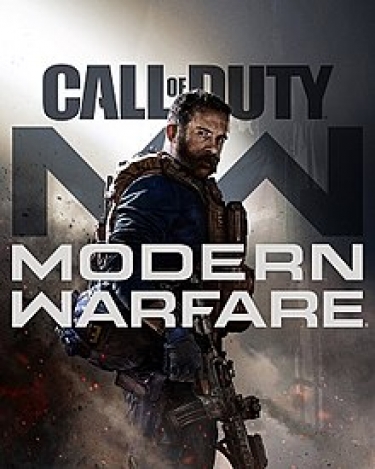 Pay for a game and then get blocked from playing it, with no recourse: is this a case of "Unfair Contract Terms?"

With Activision-Blizzard and Infinity Ward all crowing about banning 70,000 “cheaters” from Call of Duty: Modern Warfare, it’s become clear that a significant number of false positives were included and that many cheaters still exist.

Cheating has plagued the PC version of Call of Duty since the original release of Modern Warfare 2 back in 2009 – when Activision introduced its automated matchmaking system at the expense of dedicated servers. From that point onwards, Activision and its developers have strongly asserted that they take cheating very seriously and yet the lack of action has become a running joke amongst the community with hackers routinely, openly crowing that being reported won’t stop them. Even after the recent wave of bans, shameless cheating is still being recorded and reported on social media with no apparent recourse.

With Activision announcing that it will soon put all cheaters together it hints that some of the previous bans maybe overturned. However, having unfairly-banned players put up against other “cheaters” is a deeply flawed solution.

Many players are deeply distressed at having been permanently banned and Activision’s total refusal to communicate with banned players – even failing to tell them why they were banned – may actually be illegal (we’re currently investigating). At present there are numerous threads on Activision’s own forums, highly detailed reddit threads, Twitter posts, videos on YouTube (and here and here) plus Discord discussions on the matter.

In addition to Activision not telling people why they are being banned, they are also not telling people what data they look at to instigate the ban. As such, dedicated players who got banned are reverse engineering the bans by getting themselves banned on purpose through different methods. A common theme is that “injector” software is being used for bans. This type of software is typically used for aimbots and wallhacks but it’s an enormous genre of software that is also used by many other innocuous software and games too. As player, Literally Unknown, put it, “[There are] reports of bans through people decompiling code in Visual Studio, or editing videos on Premiere.”

Examples of software lionked with bans include a Nintendo GameCube app, Nintendo Wii app, but an increasingly common theme is GTA V software mods (also here). This author can also attest to this. Literally Unknown states...

“The program not being capable of connecting into the game, still triggers a false ban, which means the anti-cheat is not searching for CHEATS, but more-so for possible cheat injectors. As in my case, I had GTA V injector opened in the background, which abides the terms and conditions of R* games, as it is a single player injector.”

Some bans appear to stem from dubious apps which can modify a computer’s operation but are far from a smoking gun when it comes to cheating in Call of Duty: TimerResolution hardware tweak, HxD RAM modifier, InputMapper PS4 controller software.

Others have little idea and cite strange occurances including computer crashing causing bans, a first time user being banned, a code developer being banned.

What’s clear, is that this is wide-scale problem and Activision is simply ignoring the issue. On its own forums, ‘Ambassador’ mods, who volunteer with support queries, routinely post stock replies which offer sympathy but point out that there’s nothing they can do. Following the official customer support process leads to this dead end… 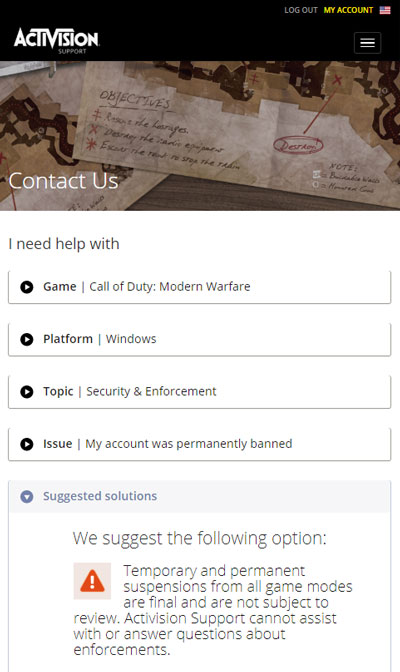 In the USA, players have reported Activision to the FTC and Better Business Bureau. A petition has also been issued on Change.org. In Australia, the ACCC (Australian Competitor and Consumer Commission), which made waves in 2014 when it overturned Valve’s no-refunds policy, has strict rules regarding “Unfair Contract Terms.” Apparently, all agencies are currently flooded with false Covid-19-related scams but we will be getting official word imminently.

Blizzard, the distributor of the PC Game, is investigating our claims further, however, we have asked them why it is that, after more than ten years, simple community policing – where players can post video clips of shameless hackers and see them banned – isn’t being considered. Furthermore, most hacked multi-player games have signature scorelines where one player consistently has 10x the number of kills of his teammates and most of the opposing team leaves the game early. We all have good games now and then (some more than others) but if a long-term player (like me, for instance) has a negative Kill/Death ratio, are they really likely to be cheating? This is surely low hanging fruit for identifying true cheats.

Another issue, is that controller-based play, particularly on PC, essentially acts like aimbot and many lobbies are filled with such claims. This leads to a flood of false reporting among the 30 million strong Warzone players.

History tells us that Call of Duty multiplayer communities, on PC, tend to die off very quickly – especially when the market is small (as in Australia). Thanks to Xbox and PlayStation CrossPlay, the PC community has been buoyed and thriving with all game modes remaining playable (which hasn’t been the case after the opening weeks on CoD predecessors). However, with cheaters still blighting the game (despite Activision’s “serious” efforts) console players are ditching CrossPlay which will hurt the CoD community overall.

While there are doubtless some whining cheats crying foul, it’s clear with the extreme lengths some players are going to, in order to prove their innocence, that false positives are significant in number. With the game and season passes costing serious money and with Activision refusing to discuss refunds, it’s likely that things will get increasingly messy. What is clear, however, is that despite all of Activision’s assertions that it takes cheating very seriously, it still, after 10 years, ignores obvious cheats and fails to properly leverage the community’s diligence in identifying them through clip recording. We’ll keep you posted with developments.

The Author would like to thank MozzieWipeOut, ezclap, AnnieKia, John Stevenson, Cristian Shepard and Literally Unknown for their contributions to this investigation.

More in this category: « Half-Life Alyx review: The most immersive video game ever made Call of Duty false bans: ACCC issues guidance to Activision Blizzard customers »
Share News tips for the iTWire Journalists? Your tip will be anonymous