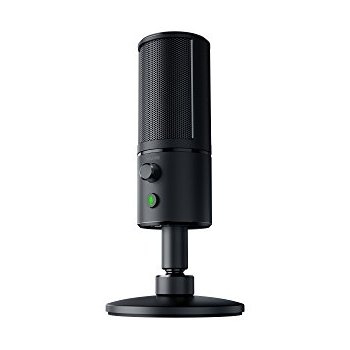 Razer's Seiren X might not cachet of the Shure 55SH Elvis mic, but it still looks great.

There’s something about microphones that makes them sexier than they ever should be.

It likely harks back to the way crooners in the 40s caressed them and how Elvis would dance with his. When Elwood Blues traded The Blues Mobile for a microphone, John Belushi could see why.

Razer’s Seiren X doesn’t quite have the old school, chrome-finished cool of ye olden forebears but it’s got a presence about it while remaining compact. The solid, aluminium stand (with rubber footprint) helps keep vibrations to a minimum. It also allows for a small amount of tilt in all directions but can still be unscrewed to fit to your own mount.

Beyond that, features are simple: there’s a mute button, volume knob and a headphone jack. Next to the latter is a mini-USB port.

This keep-it-simple approach helps keep the cost down but naturally you won’t find advanced features as with the Yeti competitor or more recent Seiren Elite sibling which allow audio capture adjustment. The Seiren X simply uses a system that Razer calls "Super Cardioid" to help keep out background noises.

In our testing, the boost in audio quality over a regular headset mic was immediately evident with all listeners commenting on how clear we were coming through. As such it can claim to be a great success.

However, on other occasions, we didn’t realise it was on and eventually we learned that our listeners had been treated to a loud, high-fidelity audio stream of our mechanical keyboard clicking away. On other occasions, listeners commented that they could hear everything a two-year-old in the background, on the other side of the room, was "saying".

So on the positive side, it’s capable of capturing great audio detail. On the downside, it captures too much of it. Nonetheless, at $139 it represents good value.