Yesterday's web outage was an Akamai error - time for a backup to CDN networks? 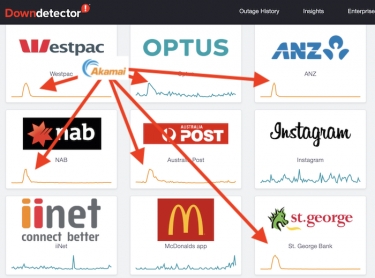 Last week it was CDN network Fast.ly that had an outage causing many global websites to temporarily go down, and yesterday it was Akamai's CDN service with a "routing error" taking many Aussie sites temporarily offline.

The Internet was originally designed to route around damaged areas, so that the US government could still launch its missiles in case of an attack taking down part of its network, or so the story goes.

Yet in 2021, the Internet seems to have various points of failure that can take down sites either across the planet, or across the country. It breathes new life into the famous statement that civilisation hangs by a thread, because so does, it seems, the global Internet.

CDNs or content delivery networks are also known as edge networks, as they make sure that content which would otherwise have to travel from a central location, or another country, is replicated and available at locations much closer to the end-users that are requesting that information.

Now, as a technology journalist, I am not an expert in networks, networking, content delivery networks or edge networks, (or despite attempts below, I'm not even an expert in comedy).

That said, clearly, the level of complexity and advanced technology to make all of this work as seamlessly as it does 99.9999999% of the time is staggeringly impressive and amazing.

But the fact "a routing table value used by this particular service was inadvertently exceeded", according to Akamai's official statement on the topic presumably means there just isn't enough redundancy or quadruple checking in modern networks to make sure such a thing doesn't happen again. Or if there is, we keep finding new ways for errors to happen in situations where we think they shouldn't happen. Maybe Murphy and one of his laws is up to his old tricks again?

Naturally thoughts turn to cyber attacks when banks like the ANZ, Westpac and the Commonwealth Bank, and organisations such as Virgin Airlines, Australia Post and other companies had their websites rendered inaccessible. People reported trying to pay for things in supermarkets and elsewhere being unable to complete their transactions.

When everything seems hackable these days, one wonders if cyber security is just an illusion.

However, Akamai assures us "the issue was not caused by a system update or a cyberattack" but the routing table value error, and that "the effect was an unanticipated disruption of service."

The company states it received an error alert "within seconds" and that "the impact was limited to Akamai customers using version 3.0 of the Routed service," but clearly, that included some major Australian customers, which Akamai says was "approximately 500" in number.

We're also told those customers using this service "were automatically rerouted, which restored operations within a few minutes" and that "the large majority of the remaining customers manually rerouted shortly thereafter," and the outage was definitely longer than just a few minutes in length, service was restored relatively quickly.

Akamai says it has "taken steps to prevent a recurrence of this issue" and that it "will also be working to make sure that every Akamai customer is set up for automatic rerouting in the future."

Still, it makes you wonder if companies should do more to make themselves immune to these kinds of unexpected events. Again, I'm not an internet networking expert, but should some of these major companies be using more than one CDN network? Or somethign else to make sure they're not at the mercy of some single point of failure that isn't supposed to be a single point of failure?

We need backups for the backups of the backups, and they all need to be ready to go, and updated, and yet not cost so much that they're uneconomic.

It's not just quis custodiet ipsos custodes that we have to worry about, but quis backupiet ipsos backuperers, too.

In the meantime, always carry some spare cash if you can, make sure to buy a cheap second SIM costing under $10 per month these days on a second telco network with unlimited calls and texts to put into the second SIM slot of your mobile phone so that mobile network outages are less of a hassle, and be aware that an outage can strike and any time and any where, lest error strike terror into the hearts of innocent web users.

Expect the best, prepare for the worst. And as always, caveat emptor, and don't let your petrol tank or mobile phone battery get emptor, either.

More in this category: « Intel launches 11th-gen Intel Core H-series (Tiger Lake-H) worldwide Microsoft has now BLOCKED ALL PCs without right CPU from even joining the Windows 11 Insider - here'a petition you can sign to ask Microsoft to reconsider »
Share News tips for the iTWire Journalists? Your tip will be anonymous