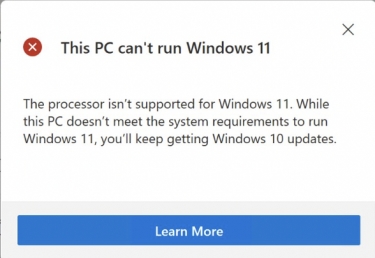 A Change.org petition has been set up asking Microsoft to allow more CPUs to run Windows 11, seeing as the 8th-generation Core i-Series processors and up are compatible, even though woefully underpowered select Atom, Celeron and Intel Pentium Gold and Silver processors are also on the list!

Ok, so you have probably already read about the TPM 2.0 requirements for official Windows 11 support on your computer, something that many people have had to enable in their BIOS to have the PC Health Check list their computer as being Windows 11 compatible.

You can download the PC Health Check app on this page with the software towards the end of this page. A lively Reddit discussion on the petition is here.

But even if your PC has a minimum of a dual-core 64-bit 1Ghz processor, if your CPU is NOT an Intel Core i-Series 8th-gen processor or better, or a select Atom, Celeron or Pentium Gold or Silver processor - then no Windows 11 for you!

It will need to be one of the processors on this list.

The latest build of Windows 10 has no problem in running on Intel Core i-Series processors from the 5th-generation and up, as this list shows, but even though Windows 11 has been called a fancy skin on top of Windows 10, Microsoft is effectively obsoleting older computers.

Sure, they'll run on Windows 10 until 2025, but the new start menu? The new App Store and Android apps? All the other Windows 11 goodies? You're not getting to play.

Now comes a world first petition calling on Microsoft to cease its arbitrary blocking of older processors being unable to run Windows 11, which you can see here.

"In a virus-weary world, where climate concerns are at the forefront, and most aren't millionaires or on the pay packets of Microsoft executives like Satya Nadella or Panos Panay, Microsoft's decision to cut older-gen Intel Core CPU's from the 7th-gen downwards from being able to officially run Windows 11 seems to be the wrong decision. Various Intel Atom and Pentium Silver processors can run Windows 11, but a 5th, 6th or 7th-gen Intel processor cannot?

"macOS 12 will support late 2014 Mac minis, early 2015 MacBook Pros and late 2015 iMacs, but my 3 year old Samsung Galaxy Book 12 with every spec matched except it has a 7th-gen Intel Core i5 processor cannot?

"A family with a 5 year old computer can't run Windows 11 officially later this year? People with computers purchased half a decade ago face a new digital divide?

"Unofficial support may well be coming, but forcing consumers and businesses to buy new computers in the midst of a global pandemic seems like a terrible decision.

"Windows 10 runs on much older equipment, and it will be supported until 2025, but Microsoft's famous backwards compatibility can't be turned up to 11, it seems.

"Microsoft: please reverse this decision, or make it clear that older processors CAN and WILL run Windows 11, or the day of Linux desktop might finally arrive, while Mac users will laugh and enjoy macOS 12. C'mon! Do the right thing, Microsoft!!!"

So, who started this petition? Me. I have a Samsung Galaxy Book 12-inch that matches all of the minimum specs - except it has a 7th-gen Core i5 processor.

It's a great tablet computer, and Windows 11 is the operating system should have delivered when it launched Windows 11. It's obviously the OS that Microsoft wished it should have launched with Windows 8.

But unless Microsoft changes its ways, it will be a tablet stuck on Windows 10. It doesn't have to be this way - the upcoming official beta versions of Windows 11 will run on computers that don't match the official spec.

It's just that when Windows 11 launches, those older computers will be forever barred.

Microsoft can change the requirements really easily. It's the author of the operating system.

Please sign the petition, and let's get a ton more Windows users on the Windows 11 train, and they'll be much happier than being forced to buy a new computer in an era where the pandemic is still causing massive economic dislocation.

More in this category: « Microsoft has now BLOCKED ALL PCs without right CPU from even joining the Windows 11 Insider - here'a petition you can sign to ask Microsoft to reconsider :'-) A COVID luddite's crazy reasons to not 'trust' the new iPhone 13 »
Share News tips for the iTWire Journalists? Your tip will be anonymous