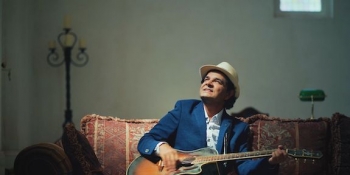 Mahmood Khan will be the first Asian artist to record original songs with the Willoughby Symphony Orchestra when the musical powerhouses combine for a recording on 16 April at Trackdown Studios.

Billed as "representing diversity" in "Australia’s most significant music event of the year", Khan's 16 April performance recording original songs with the Orchestra is just his latest achievement.

Khan, a Pakistan born singer-songwriter, is used to making history. In 2009 his song Like the River, recorded live at the Sydney Opera House, became the first song written by a Pakistani artist to reach number one on the ARIA Pop charts - see screenshot at the end of the article documenting this.

In the decade before Psy's Gangnam Style eventually reached a billion views, Khan reached a then-whopping 50 million views on YouTube, for which he was invited to perform on the Kerri-Anne Kennerly Morning Show on Channel 9, as can be seen here.

Full details of Khan's collaboration with the Willoughby Symphony Orchestra is below, first though is my video interview last week with Khan, talking about his impressive achievements, his music, the performance with the Orchestra, Macs and more!

Now comes the collaboration with the Willoughby Symphony which is billed as "Australia’s most outstanding community orchestra". Established in 1965, the symphony proudly boasts it "has one of the highest subscription renewal rates of any orchestra in the nation and a passion for supporting diverse and up and coming musicians".

Willoughby Mayor Gail Giles-Gidney said: "Willoughby City prides itself on being a City of Diversity. I am thrilled that the Willoughby Symphony is participating in a project that celebrates diversity in music".

Doug Emery said: “By combining Mahmood’s unique style with the big orchestral sound, we’re creating an experience that crosses borders. Such cultural bridges are as important in today’s world as they have ever been.

"It is a delight to be invited on board this collaborative project. Mahmood's concept resonates with us. As members of the GAMBIRRA MOB; respecting and embracing multiculturalism is what we are all about," founder Gambirra Illume said.

"The MOB represent diversity. We empower, educate and inspire each other and our audience. As I would say, where words fail – music speaks. We are a global collective, interconnected," Illume added.

The project is Khan's first time working with a professional symphony.

"It really is a dream come true to be recording with a symphony orchestra," Khan said. "The songs selected for this project are very melodic, especially one song called 'Jagamarra/Eternity Return' which was inspired by the first Aboriginal friend I made in Australia and is named after him. I am honoured to be recording with an Aboriginal choir which resonated with me spiritually at many different levels,' he said.

The project has already received praise from industry heavyweights including Desert Song Festival, C31 Melbourne and Channel 44 in Adelaide.

The recording will be released on Spotify and Youtube in May.

For those wondering about Khan's No.1 ARIA ranking with his song Like a River, Khan provided this screenshot from the time to show the success of the single in 2009. Khan explains: "the artist is MKF which is short for Mahmood Khan Funk. The record label was MGM".

You can learn more about Mahmood Khan here, with Khan's Sydney Opera House and Kerri-Anne Kennerly Morning Show performances below.

More in this category: « Samsung S10 features – we saw some of them in Huawei's Mate 20 Pro Lack of 5G no problem for Apple and its iPhones this year »
back to top