The gigabit fibre NBN is a lost opportunity, when will we build and get it? 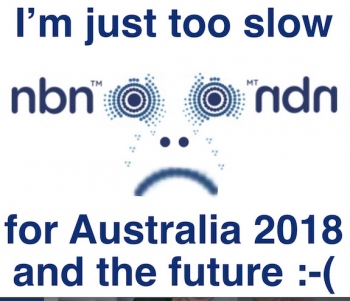 The sad reality of the NBN is that 100Mbps connections are just too slow in 2018, and only God knows when gigabit Internet will become cheap and affordable for all.

I have relatives who live in Hong Kong, and they enjoy fibre-delivered gigabit Internet connections.

My cousin's apartment gets nearly 1000Mbps (1Gbps) up, and the same down, and even during busy times, he is still getting hundreds of megabits per second.

So too are uploads of files and back-ups to iCloud, Dropbox, Acronis and similar services.

Indeed, the speeds are phenomenal with an app like Teamviewer.

Never before have I felt like operating someone else's computer over Teamviewer was happening in real time without jerkiness than when that person had a fibre-delivered gigabit connection.

Obviously I needed to have very fast download speeds, and I was using a very fast 4G LTE smartphone hotspot connection.

In any case, all of this comes down to a simple fact: Australians are being right royally ripped off with their Internet connections. 5G isn't here yet either, and who knows how expensive it will start off being.

I never wanted to LOSE 10Mbps of connection speed, and of course, at busy times, speeds can go down to 5Mbps upload according to speed tests, with download speeds half or slower.

Yes, it all depends on where you're getting your data from and the speed at which they can upload to you, but the mess of connection speeds and types is a great shame.

Now that Malcolm Turnbull is gone, and yet his Multi-Turnbull-Mess remains in its disastrous full swing, it's time for either the Liberal or Labor parties to announce what their plan is to bring as much fibre to as much of populated Australia as possible.

Can the damn submarines and spend that $50 billion on fixing Australia's broadband, because we've gone from 5Mbps average ADSL speeds, to scarcely faster NBN speeds, and until we get a real plan for real fibre, given 5G is still years away from widespread reliable and affordable deployment, it all remains a sick and sad joke.

Look, maybe FttC or FttK will finally deliver vastly better speeds than FttN, and a lot more reliably at that, but when China and the rest of Asia are enjoying gigabit speeds, or at least the option thereof, and we are suffering with a broken NBN, something has to give.

Sadly that will mean taxpayers giving a lot more taxes to build the NBN properly, but it's obvious now, in 2018, after all the failures and missed deadlines and obnoxiously highly paid NBN executives of the past (and present!), that this is something incredibly important, and we keep going backwards day after day, week after week, month after month and year after year that our NBN continues to suck, and suck badly.

Turnbull is finally gone. His awful Multi-Turnbull-Mess should finally go, too.

More in this category: « Is Huawei 5G ban in Australia part of the current battle for PM? Today at Apple: 50 new 'Today at Apple' sessions »
back to top