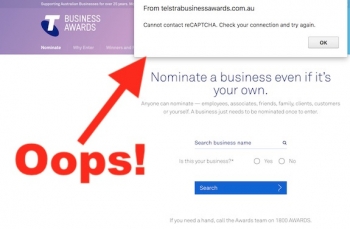 After listening to the Telstra That Business Show on the Nights with Steve Price show on Radio 2GB (and on over 50 stations across Australia), I wanted to nominate a business, but couldn't.

Ok, so if you want to nominate a business for Telstra's annual Business Awards, here's a tip – never leave it to the last minute.

A Telstra spokesperson has read this article, and has sent the following message, which we're always grateful to receive and read:

"Apologies for the poor experience you had trying to nominate a business on our Telstra Business Awards website last night.

"From our investigations this morning, I can confirm we had an issue with the Recapture plug-in we use on the site which caused an issue for a very small number of people trying to nominate businesses between 11pm and when nominations closed at 12am.

"We’re continuing work to understand what caused the issue and prevent it from happening in the future.

"To help anyone who may have experienced a problem, we’re encouraging them to call us on 1800 292 737 or via email at awards@telstrabusinessawards.com before 5pm today in order to have their nomination accepted in our 2018 program."

So, my thought is that if you are indeed one of the few people who tried nominating last night, you have a final chance to get into the awards, if you'd still like to nominate!

The original story continues below:

The awards nomination process opened towards the end of January 2018, as covered by iTWire here.

As a happy listener of Price on most evenings, and enjoying the vast majority of the segments and shows within the show, I often listen to the Telstra That Business Show which airs on Wednesday nights.

I even rang the show once when Steve and the presenters were wondering if anyone had delivered a pizza by drone yet, and I was able to call and relate the story about Domino's Pizza claiming to be first in the world to deliver a pizza in 2016, a claim that Russian pizza company Dodo Pizza contested, as it had made a delivery of pizza by drone in 2014.

I don't want to drone on about it, but you can read the series of articles on the topic here.

So, as I was listening tonight, Steve and the Telstra hosts were reminding the nearly nationwide audience that tonight was the last chance to nominate any business, including your own, for the Telstra Small Business Awards, and that you had until up to midnight to do it.

I was driving from Sydney to Canberra at the time, and only arrived about 90 minutes before the midnight deadline – indeed, it is now 11.03pm on Wednesday 28, March, with 57 minutes to go.

I decided I would nominate a friend's business, and discovered that upon going to the Telstra Business Awards website, I was greeted by the messages "Cannot contact reCAPTCHA. Check your connections and try again."

You can see screenshots of the reCAPTCHA problem below.

I tried different browsers, I tried connecting via my wired connection, I tried wirelessly, I tried on my phone on 4G, but the same message appeared.

I tried calling the 1800 AWARDS number, but the Telstra message said the service was closed, which is a shame. It might have been a good idea for Telstra to have people in a call centre somewhere on the planet able to help people with last minute entries.

However, as previously noted, don't leave entering to the last minute!

It's just a shame that the Telstra That Business Show promoted the competition tonight and urged people to enter before the midnight deadline, which leads me to wonder how many businesses weren't able to enter.

Enter early! A great and simple lesson for us all. 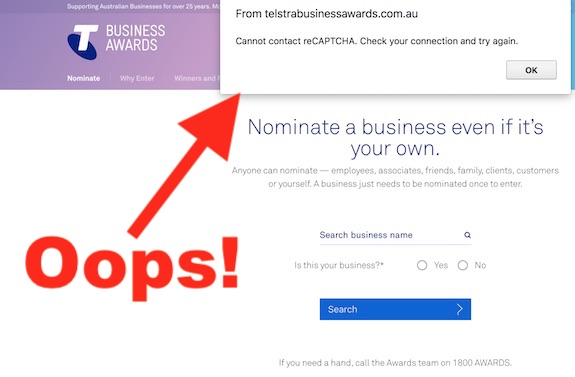 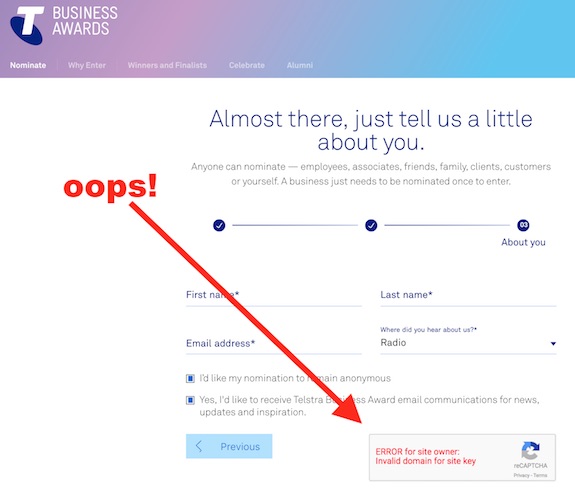 More in this category: « Can Facebook face up to its question of trust? Amazon Alexa primed for April Fool's fun »
BACK TO HOME PAGE
back to top