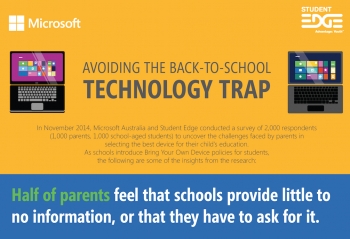 Buying Windows, Apple or Google - which one is a technology trap?

With Apple’s iPad and MacBooks being very popular devices in schools, Microsoft has come out on the attack to convince parents to buy a Windows-powered laptop, 2-in-1, ultrabook or tablet for 2015.

It’s back-to-school buying season, and both Intel and Microsoft have decided to inject some life back into the Wintel alliance and promote Windows-powered devices as the ideal back-to-school student technologies.

Of course, anyone that buys a Mac can run Windows on it, too, but at an added cost, and without the touch screen or stylus options that various Windows devices offer as standard.

So, with Apple’s Mac sales as shown by this week’s IDC stats to be outgrowing the PC market, and the global PC market declining for the third straight year, it only makes sense for Microsoft and Intel to do some old fashioned marketing and promotion.

Which is exactly what it is doing with its latest media release entitled ‘Aussie parents overwhelmed by back-to-school tech decisions’.

The anti-Apple attack is clear, with Microsoft touting ’new research’ while reveals Aussie parents are ‘potentially wasting billions on devices that aren’t maximising their child’s potential in the classroom’.

Potentially potential. But is this a potent enough attack to slow down the Apple onslaught?

Microsoft Australia’s ‘new research’ says that it ‘shows parents are in the dark on the best technology to purchase for their school-aged children – with half of parents surveyed stating that schools provide little guidance on what device to buy.’

I guess this is funny, especially in a world where former Australian Prime Minister Kevin Rudd wanted every school to simply give a computer to the kids, free of charge (except to the taxpayer) in a plan which failed so spectacularly as Kevin Rudd’s plans had a tendency of doing.

With Windows still being the world’s most popular operating system, and with Windows devices dominating most computer-selling stores, Windows is still a genuine and legitimate choice.

Apps on smartphones and tablets may be where all the hot new software action is happening, but that doesn’t mean software has dried up on PCs.

Windows, after all, still has a massively rich library of software to do just about anything, and with Windows 10 and new ‘universal’ apps that will be easy to make run on Windows-powered desktops, tablets and smartphones, Microsoft is still a mighty force to be reckoned with.

So, what does Microsoft Australia’s study reveal?

It shows that ’75% of parents are spending up to $1,000 on devices, and more than half are willing to replace these devices every two to three years. With a quarter of parents admitting to buying the wrong device for their child at some point, Aussie families are potentially wasting billions of dollars on the wrong devices for children over their school life.’

Microsoft says the ‘billions of dollars’ figure comes from ‘The number of households in 2011 is derived from the ABS (2012a) 2011 Census Basic Community Profile – taking into account a two child average per household, with parents replacing devices every three years over a child’s school life – with one in four parents making the wrong choice.’

Microsoft also states its findings ‘also show 70% of parents want to relinquish their decision making power when it comes to choosing devices, calling out for a range of appropriate devices to be recommended to them.’

So, the Wintel alliance is reborn, with Microsoft and Intel launching ‘a new interactive tool’ called Devices for Schools, designed ‘to help guide parents and students through the technology maze, by helping them to find the appropriate device suited to their needs.’

Intel probably doesn’t care too much - after all, it’s processors are in all MacBooks and in various Google Chromebooks, too.

But with Microsoft and its OEM partners Intel’s biggest customers, it’s in Intel’s interest to get as many people buying Intel-powered devices as possible, rather than ARM or AMD powered devices.

So, what are some of the other findings?

Of course, there are plenty of Apple and Android tablets at prices well within the $300 to $700 range, and Chromebooks too. Apple’s cheapest MacBook doesn’t fit into this price bracket, however, but there are plenty of Windows-powered devices, from tablets to laptops to 2-in-1 devices that are in this price range.

Microsoft’s Surface Pro 3 doesn’t, either, fitting into the same starting price bracket as a MacBook Air starts at (when you take the 10% Apple Education discount into consideration with the base MacBook Air starting at the non-discounted price of $1099).

That said, Microsoft’s Surface Pro 3 starts with a 64GB SSD in its base configuration, going to 128GB pushes the price up to $1209, but the Surface Pro 3 is a tablet and ultrabook in one with stylus, something you’d have to buy a MacBook Air and an iPad (and separate stylus) to mimic - or is that mimac?

Naturally, if you buy a Windows device, you will have to think about Internet Security software. Windows Defender is built-in free of charge, but Norton, Kaspersky, BitDefender, Trend Micro and specific malware fighters such as Malwarebytes and Hitman Pro are things you’ll likely need to buy, if not a combination of at least Internet security and separate anti-malware program.

You can buy Internet security programs for Macs, too, but the free options are generally more than good enough on the Mac side of the fence, and plenty of people (perhaps foolishly) don’t bother to run any Internet security on their Macs at all, and don’t even think to turn on the firewall in the Mac System Preferences (which you should do and which Apple is silly to leave off by default).

Also if things go wrong on a PC, you don’t have easy access to Apple’s ‘Genius Bar’ to help you fix problems, and Microsoft has stupidly made image-based backups non-automatic on Windows 8.1, preferring instead to make only the ‘File History’ backup available on an automatic basis.

It’s sadly not as good as Apple’s Time Machine, but File History does actually work - with both only working if you bother to plug in a backup hard drive and switch the backup process on. 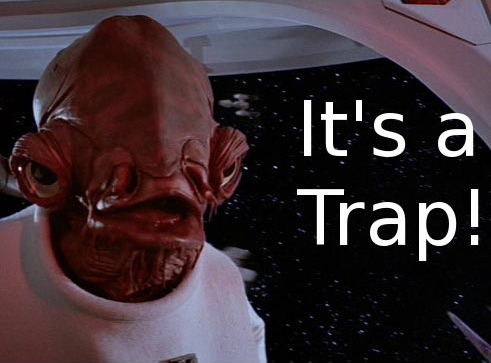 The famous 'it's a trap!' meme from Star Wars: Return of the Jedi

Both Windows and Mac OS X also have free cloud storage, whether through Microsoft’s OneDrive or Apple’s iCloud Drive, so at least you can keep online backups as well, again - if you actively use those services, which is recommended.

Pip Cleaves, parent, former teacher and Senior Education Consultant at Design, Learn, Empower, ‘believes technology innovation in schools can be incredibly beneficial but the wrong devices can hinder a student’s growth and development.’

“In this day and age, technology is now firmly integrated within Australian classrooms, and having the right technology is critical in enabling students to keep up with the curriculum being taught. However, it’s also critical that each device is fully compatible and the student can access specific programs, otherwise they risk falling behind the rest of the class,” said Cleaves.

Jane Mackarell, Microsoft Australia Education Product Marketing Manager, says, “Whether it’s the sheer abundance of technology options available or the confusion as to the capability required of the device, parents are feeling overwhelmed about the decision at hand – but there are plenty of resources available that parents can tap into.”

“Replacing a device every two to three years can be a stressful and costly affair. Schools need to be clear on what each device must be capable of, while parents should self-educate on what new technology is available to them, and they’ll be rewarded in the long run,” she concluded.

Microsoft says ‘The “Bring You Own Device” (BYOD) research, was conducted by Student Edge on behalf of Microsoft Australia, surveyed 1,000 parents with school-aged children, along with 1,000 school-aged students.’

Is this new website and Wintel revival enough to get you to buy your kids a Windows-based device this month?

When it comes to the crunch, what will you do, go Apple, Google Chromebook or Microsoft Windows?

More in this category: « Is it time to Amazon Fire Jeff Bezos? iPads and education - a winning combination for people - and Apple »
Share News tips for the iTWire Journalists? Your tip will be anonymous