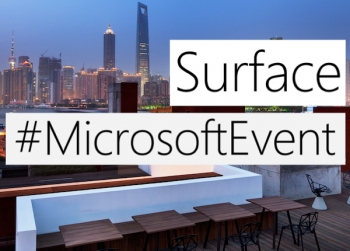 It has been — and will still be — a busy month of May for Microsoft.

Not only was there an event on 2 May launching a new version of Windows dubbed Windows 10 S, alongside a new touch-screen and Alcantara-laden Surface Laptop, but there’s Microsoft Build 2017 in Seattle from 10 to 12 May and now Microsoft’s special Shanghai Surface showdown.

Microsoft’s 2 May event which unveiled Windows 10 S and the Surface Laptop had naturally made people wonder whether a Surface Pro 5, Surface Book 2 or Surface Phone would surface, but they didn’t.

Instead we got the Surface Laptop that Microsoft should probably have launched right from the beginning, rather than several years later.

Then there’s Build 2017 this week, which has elicited expectations that the long-awaited Surface Phone would finally make an appearance, especially after Microsoft promised that Qualcomm Snapdragon 835 processors would be able to run the full version of Windows, including traditional Windows desktop apps.

In between all of this came late last week’s announcement from Microsoft of a new #MicrosoftEvent, which simply states that: “On May 23 in Shanghai, Microsoft will show the world what’s next. Check this site for updates and more information.”

There was also the tweet from Microsoft Surface executive Panos Panoy, which simply states: “See you in Shanghai. May 23. #MicrosoftEvent #Surface”

That could be an oblique reference to a Surface Phone able to run a full version of Windows, but who knows? It could be anything – after all, what does a phone look like if it doesn’t look like a phone in use today?

It can hardly look like an orange, or an apple, or a pear. It surely won’t look like a wheel, or a cube. If it looks like a banana we’re getting closer to a traditional phone form factor.

Perhaps it will just be an Airpod-like device. A phone that fits in your ear.

Still, anything is possible, but at least we know that May has not only already been the month of the Surface with the Surface Laptop, but we are guaranteed more Surface action on 23 May in Shanghai.

The Surface successor sure will surface, and on the face of it, that’s a good thing for the world of Windows and the megalopolis that is Microsoft.

We’ll have more when we know it, as will the rest of the tech world!

More in this category: « Intel Surface Phone to launch at Microsoft Build 2017 next week? Samsung Galaxy Note 8 rumours to pause purchases of Galaxy S8? »
Share News tips for the iTWire Journalists? Your tip will be anonymous