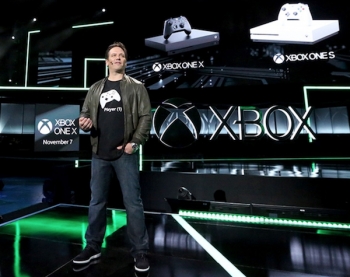 Microsoft has launched what it claims is the ‘world’s most powerful console’, and seeing as it runs on AMD processors, will it finally also be a Windows 10 PC?

The Xbox is Microsoft’s games console platform, with the newest and most powerful yet being the Xbox One X.

Microsoft launched this new console at E3 2017, and has issued a blog post entitled “The Xbox E3 2017 Briefing: Everything you need to know.”

Of course, the blog post doesn’t include everything you need to know.

We know it will retail for US$499 and A$649, and that it has a 1TB hard drive (in an era when SSDs are the preferred way to store data). It is capable of full 4K graphics at 60fps, and even has a 4K Blu-Ray drive, unlike any of its competitors, as well as full backwards compatibility with Xbox One games, and “nearly 400 popular Xbox 360” titles.

Due to arrive on 7 November, we still don’t know if it will come with a virtual reality headset as long ago forecast for "Project Scorpio", the code name for the now announced Xbox One X, but given the PS4 has one, and given Microsoft has its HoloLens augmented reality headset, a VR headset for the Xbox One X seems a given.

There’s also talk that the VR headsets from Asus and others coming later this year for Windows 10 will also have to be compatible with the Xbox One X.

There’s also Internet memesters making fun of the name, with Xbox One X having three Xs in the name, thus potentially making it the X X X edition. Some are also calling it the “XbOX” for short.

Engadget says its specs include a “custom 8-core AMD CPU clocked at 2.3GHz, a 6 teraflop GPU clocked at 1.17GHz and 12GB of GDDR5 video RAM".

CNET also has a brief comparison between the Xbox One X and the recently released and upgraded PS4 Pro.

So, with this custom 8-core AMD CPU and 6 teraflops of GPU power, it sounds like this new Xbox One X is also more than powerful enough to be a very powerful Windows 10 desktop computer, even if Microsoft were to force compatibility with the Microsoft Store only, and prevent installation of apps from the Internet.

With an AMD CPU, there’d presumably be no need to emulate x86 or x64 code, and no worries about potential Intel lawsuits over x86 emulation in ARM processors, as iTWire colleague Sam Varghese wrote about last week.

The ability to run Microsoft Store apps only is not new, as seen with the company’s Surface Laptop, which will come with Windows 10 S that prevents installation of apps from anywhere on the Internet unless irreversibly unlocked into Windows 10 Pro.

Add a wireless keyboard and mouse, or wired models via USB if you prefer, plug it into any TV or monitor with an HDMI port, and you can have the ultimate Microsoft desktop computer alongside your ultimate gaming console - even if it only runs Microsoft Store apps, or the full Windows 10 Pro in a virtual environment.

With Windows 10 S limitations in place, it would be Apple-esque in its imperviousness to viruses, malware and ransomware - as is the Xbox console itself, which along with the Playstation can theoretically get a virus but which doesn’t appear to have happened in any widespread manner, ever.

Microsoft has also talked up unification of Windows 10 and Xbox in the past, alongside the current reality of games released to run on both platforms, allowing PC and Xbox players to compete against each other.

There were also reports from last year of Satya Nadella saying Windows 10 Universal Apps would be coming "soon" to the Xbox One, so with the world’s most powerful console, a pretty powerful Windows 10 PC may well shortly be a given.

As for the Xbox One X launch itself at E3 2017, Microsoft has unveiled what it calls a “historic E3 lineup with 42 new games including 22 with console exclusivity.”

The company proudly boasts that its “Xbox One X was designed to be the best console to create and play games on, putting the greatest graphic fidelity in the hands of the world’s best game creators to create true 4K games".

Xbox chief Phil Spencer also promised that “every game will play great across the Xbox One family, and Xbox One X also makes your existing library even better, with better textures, smoother framerates and faster load times.”

Spencer added: “Xbox empowers game developers large and small to create different types of games for every type of player.

“Not only do we have the biggest cross-platform blockbusters on our platform, we’ve also scoured the world to bring our fans unique content from creative artists that capture the imagination.”

There’s also the promise that all the “Xbox One games and accessories you already own are compatible with Xbox One X, so if you’re an Xbox gamer, chances are you already have a library of games that will look and play better on Xbox One X.”

This means the aforementioned Xbox One backward compatibility, and as noted above, “nearly 400 popular Xbox 360 games to include original Xbox classics, starting with fan favourite “Crimson Skies”.”

We’re also told that “Gears of War 4,” “Forza Horizon 3,” “Minecraft,” “Resident Evil 7,” “Final Fantasy 15,” “Tom Clancy’s Ghost Recon Wildlands,” “Rocket League” and dozens of other popular Xbox One games will receive free updates to take full advantage of the power of Xbox One X,” with a host of these titles to be enhanced “to run in true 4K, and many will be available at Xbox One X launch.”

Interestingly, Microsoft says its Xbox One X is the smallest Xbox console it has ever built, and naturally boasts of being “created to deliver uncompromised power, ultimate compatibility and design excellence.”

Microsoft claims “40% more power than any other console,” and the ability to “experience immersive true 4K gaming when paired with a 4K display, such as Samsung’s flagship QLED TV.”

Existing games played on an Xbox One X will look even better, with “better textures, smoother framerates and faster load times, even on a 1080p TV.”

With a 4K Ultra HD Blu-Ray player and 4K streamed content, and with HDR support for gaming and video, and Dolby Atmos support, Microsoft is going for all the 2017 media entertainment buzzwords in an attempt to smash the PS4 Pro, Nintendo and anyone else into as much irrelevancy as possible.

That is so even though Sony and Nintendo will continue doing all they can with exclusives of their own and more to fight back against Microsoft as hard as they possibly can.

There are 22 Xbox One X exclusive titles, and you can read about all of them with more detail at Microsoft’s Xbox One X blog post here.

Here’s Microsoft’s Xbox One X official trailer – no doubt Microsoft will be releasing a lot more information over the next few months up until the November 7 launch date:

The full Xbox One X briefing is below – fast forward to 33 minutes and 20 seconds for the briefing to actually start.

More in this category: « Apple WWDC 2017 – a MUST SEE keynote with game changing new tech, new OSes and more iPhone to celebrate a decade since launching on 29 June 2007 »
BACK TO HOME PAGE
back to top