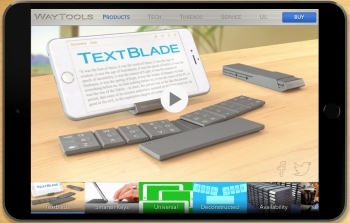 The next-gen TextBlade keyboard for Bluetooth 4.0 compatible devices is nearly here, and MacRumors was lucky enough to get a pretty extensive hands-on with the new device.

TextBlade is an amazing looking new ultra-portable, pocket size keyboard that clearly revolutionises the QWERTY keyboard that has been in use for over 100 years.

After reading about it at the now defunct TUAW site (thanks for nothing, AOL bozos who ‘retired’ the TUAW site), I wrote about TextBlade on 19 January 2015 at iTWire here.

I was so impressed by the device, so ably demonstrated in a video at WayTools, let alone the amazing WayTools website that I ordered one immediately, and am awaiting delivery in early April, although anyone ordering now will have to wait a couple months more because WayTools seems to be pre-selling at an amazing pace.

Only yesterday I decided to have a look at the status of my order, noting that a ‘butterfly’ component (which sits under the keys) was being remoulded, which had pushed out delivery from late March to early April.

Again, I was impressed - this time by the fact the site was giving clear information on the various parts of the keyboard being built, and even doing so in real time.

So, when I fired up MacRumours a few minutes ago, I was very pleased to see it had received an invitation from WayTools to have a hands-on preview and do to an in-depth ‘first look’ at the device.

The long article went into further detail as to why the butterfly component needed remoulding, and - here’s that word again - I was very impressed with the MacRumours article, as it goes into great detail on the typing experience, why the keyboard is made the way it’s made and much more.

Unfortunately, I was disappointed by the attitude of some MacRumors readers who immediately accused MacRumors of having written an advertisement for the device, which MacRumors was forced to defend in the comments section, noting that it has never written a sponsored post and that it received no payment for the article.

On a personal note, the thought never once crossed my mind as I read the article that this ‘must have been’ some kind of ad, so it was disappointing to see the cynics out there who doubted MacRumors’ bonafides.

I was simply extremely happy to see detailed information on a device I’m eagerly awaiting the arrival of at my postal address, and it is a definite must-read for anyone who has either already ordered or who is thinking of ordering.

After all, there are many alternatives out there, from Logitech’s To Go keyboard and Microsoft’s foldable Bluetooth keyboard which it previewed at its MWC Windows Phone presentation.

In any case, the article confirmed for me that the TextBlade is looking like it is going to be an excellent portable keyboard, and while MacRumors clearly states you will take some time acclimating to the smaller device, whose keys aren’t spaced out anywhere near as far as the MacBook Pro keyboard I’m typing this article on right now, it sounds like it will be a quick process - especially for a very fast typist such as myself.

Clearly the device will not suit everyone - various commenters at the MacRumors article stated they preferred standard keyboards, while others were, like me, delighted to get some great detailed extra information on the device.

So, whether or not the TextBlade is something that appeals to you or not, if you’re curious to know more about the most exciting looking development in keyboards for years, it is definitely worth reading the MacRumours article to learn more for yourself.

Naturally, I’ll have my own review of the TextBlade once my personally paid-for unit arrives.

And no, WayTools did not pay me for this post, they did not invite me to have a hands-on - and MacRumors didn’t pay me to defend them either.

More in this category: « If Telstra must take risks to win, where is my Artemis pCell? Apple’s MUST-SEE March 2015 keynote WATCH NOW »
back to top