Intel Surface Phone to launch at Microsoft Build 2017 next week? 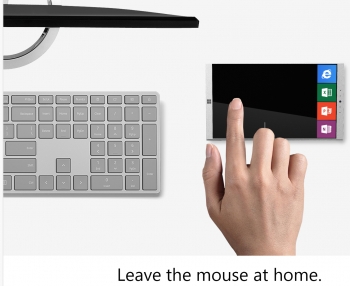 Rumoured for years, Microsoft might finally release a Surface Phone able to run x86 Windows desktop apps, with or without Continuum, on either Intel or ARM processors.

Microsoft’s Surface Phone, a long-rumoured concept that would allow Windows Mobile phones to run traditional Windows desktop apps, may finally be coming next week at Microsoft’s Build 2017 in Seattle.

Although Microsoft has now long positioned Windows as the one true OS to rule smartphone, tablet, laptop, desktop and Xbox, not having an ultra mobile smartphone platform able to run the same Windows x86 and x64 apps as desktops has hobbled this vision.

So too has the lack of an actual Surface Phone capable of doing this.

Sure, Microsoft’s existing Windows 10 Mobile OS, running on ARM processors and on compatible phones, can run in Continuum mode, allowing the closest thing yet to a desktop Windows experience from a smartphone platform.

As noted, however, rumours of such a smartphone have been around for years.

I did a search online for articles by iTWire’s Microsoft Windows aficionado, Ray Shaw, and quickly found four great articles that looked at this possibility.

There are probably more references that I’ve missed in my brief search, but the first is from 11 December 2015 entitled “Will the Surface Phone ever be released.”

The last is entitled “Windows 10 ‘computer in your pocket’ soon” from 8 December 2016, where Microsoft’s claim of being able to run the full desktop version of Windows 10 on a Qualcomm Snapdragon 835 processor is examined.

All are definitely worth reading to go beneath the surface of Surface news, rumours and views.

So, besides the ongoing expectation that a Surface phone will finally surface, what is the reason for the latest round of rumour-mongering that might actually see a Surface phone lift up into the light?

It appears to be thanks to Behance and its talented industrial product designer, Casmir Valeri.

Click over to his site at the link directly above, and you’ll see some fabulous renders of what the next Surface Phone might actually look like, complete with a plethora of powerful features and accessories.

The Sunday Express was so impressed with Valeri’s work that its article is entitled: “If Surface phone looks anything like THIS, Microsoft has a surefire hit on its hands.”

Of course, fiction is often more fun than reality, and no-one truly knows what the first ever Surface phone will truly look like, what it will or won’t do, and whether it will ever really arrive, or not.

Indeed, many think Windows 10 Mobile is a dead platform, despite the HP Elite being called “the desktop of the future”.

Still, even though Microsoft killed the Zune, the Kin and the Courier (before release), it doesn’t give up easily.

The mythical Surface Phone might just surface next week after all, and if not, there’s still plenty of 2017 before the world awaits a Surface Phone surfacing in 2018, instead.