HTC U 11 lets you use the force, but will users really care? 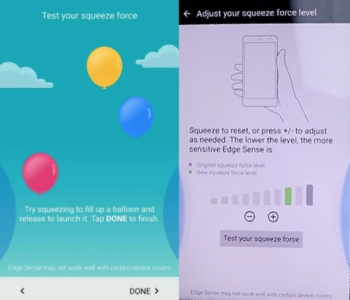 HTC’s “Edge Sense” feature has a screen that lets you test your “squeeze force,” but is this attempt to squeeze out a new feature going to work?

The big question about HTC’s Edge Sense feature that lets you squeeze the sides of your smartphone is whether we’ll ever see it on any other HTC smartphone ever again.

Right now, Edge Sense is getting a lot of buzz. It’s a feature that lets you squeeze the sides your phone, something not seen on smartphones before, as such, although the mostly unknown Nubia Z11 Android does offer side interactions, which reminds us that the Galaxy S Edge series of smartphones and the S8 models also have edge-based interactions on their screens, too.

Of course, you can also squeeze or press down onto the surface of an iPhone 6S or 7 class device in an action called 3D Touch, but that’s not the same as squeezing the sides of your phone, something you can do with one hand.

iTWire Android aficionado Ray Shaw is usually impressed by every new Android smartphone he reviews, with the HTC U 11 no exception, calling it his "main squeeze", although there are definitely various things he doesn’t like about it that you can read about here.

The thing is, with squeezability the one true standout feature, is this something we’ll truly end up seeing stand the set of time?

The Verge doesn’t seem convinced, even as HTC previews new features for its Edge Sense capability, stating: ”HTC’s next Edge Sense features for the U11 still seem very gimmicky.”

That article shows the following video, where HTC previews ways you’ll be able to use Edge Sense in the future, but they’re all things that you can do right now by simply touching the screen on competing devices with one or more fingers.

And when it comes to protective cases, HTC warns that some will inhibit proper Edge Sense sensitivity.

What are some other features once seen on Android flagships in an attempt to “kill the iPhone” and Android competition?

The Samsung S3 once had a temperature sensor – a useful thing if you wanted your smartphone to tell you the temperature of the room you’re in at the moment, not the temperature at some outside location some distance away from you in the city you’re in.

The temperature sensor got obliterated, something I was very disappointed to see at the time, as I enjoyed using it.

Samsung also launched the ability to use your eyes to scroll up and down on websites, ebooks and other pages of information with the Galaxy S4 smartphone.

I had hoped and expected Samsung would perfect this technology, but instead, Samsung found it too hard, and simply abandoned it. What was once a flagship feature, first heavily rumoured and foreshadowed, then a key launch feature and highly promoted, was cast aside.

A similar capability never made it into other smartphones either, and so eye control has been relegated to the history books, to be replaced one day by thought control – if it doesn’t get obliterated before someone is brave enough to launch it.

Apple has its 3D Touch, letting you press the screen with greater pressure to peek and pop, and its utility has only grown.

On the Android side of the fence, a Huawei model or two, from memory, tried introducing the same kind of screen pressure sensitivity, but do you hear about it on Android? It’s a feature that hasn’t been copied, yet is ever more widely available in iOS apps.

Even the stylus that Samsung has popularised with its Note series exists in a competing format on one or two LG models, and that’s it. Other Android makers have ignored the technology, while Apple has improved it this year with its 2017 iPads.

There’s no sign that any other Android manufacturer will bother with adding squeezable edges to their smartphones, and certainly not in any of the non-flagship devices.

Aside from opening a favourite app or taking a photo, there’s no truly killer app usage scenario for Edge Sense.

It just looks like the latest gimmick from one Android maker in 2017, which might make it into one of HTC’s 2018 models, but which may get squeezed out of the feature set thereafter, never to be seen again.

Time will tell how strong the force is with Edge Sense, but as Han Solo, Luke, Anakin and various other Star Wars characters said on the silver screen… I’ve got a bad feeling about this. 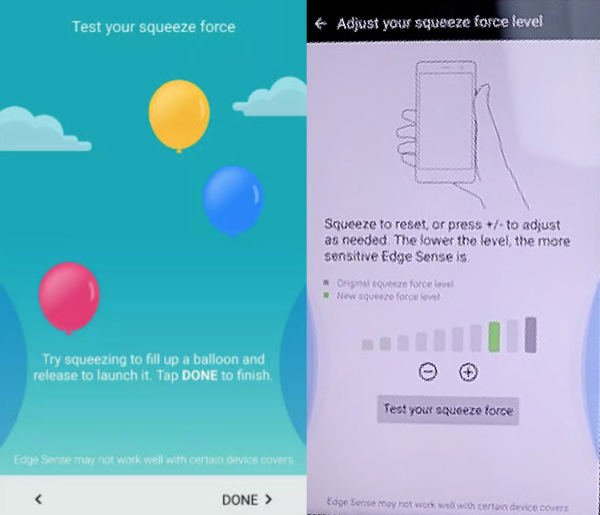 More in this category: « Gmail to stop appalling practice of scanning emails to deliver ads Official iOS 11 first public beta should arrive this week »
BACK TO HOME PAGE
back to top