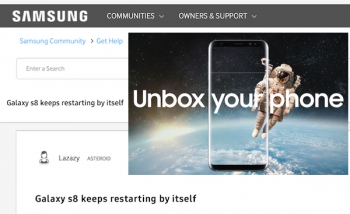 Users at XDA-Developers and Samsung’s US community website are reporting random reboots, with home remedies on offer including weather widget removal.

The most recent update from Samsung for its new S8 and S8+ smartphones is being blamed by some users for revving up the random reboot issue.

Some users who clearly pre-ordered and have been using either handset before they went on official retail sale yesterday say they had been enjoying several days of stability, before the latest update caused the random reboot rigmarole.

Others described newly purchasing either S8 model, then transferring data and apps from older Samsung smartphones such as the Galaxy Note 4 using the Samsung Switch software app, only to then start experiencing random restart rage.

And naturally, in the midst of three pages of users trying to figure out what the cause og the problem might be at the XDA-Developers forum, along with 21 pages on the issue at the official Samsung US Community forum, are users who have reported no issues at all with their shiny new S8 or S8+ devices.

Some users report removing the SD card and running apps and media files from internal storage only to get their devices running smoothly again without restarts, while others suggested removing the weather widget as can be seen from page 19 onwards.

A user on the third page of the XDA-Developer Forum asks whether the issue only affects the Qualcomm Snapdragon 835 processor, only on sale in the US and Canada, and wonders whether any reports of the same issue happening to non-US versions of the S8 and S8+ which exclusively feature Samsung’s own Exynos processor.

Indeed, no reports from Australia or elsewhere around the world appear to have arisen as yet, so whether its a weather widget, a wonky third-party app, recent update issue or something else is yet to be definitively determined by Samsung is yet to be seen.

Presumably if an update can be crafted to crush the issue, it will be created and widely distributed as rapidly as possible to remedy the rogue random rebooting.

The unexpected development adds to a small list of issues that have been reported for the S8 and S8+ thus far, which include a "red tint" to some S8 and S8+ screens (for which an update has reportedly already been issued), a Wi-Fi issue for some South Korean S8 and S8+ issues, a "DQA" issue and some "fast charge" wireless charging issues.

The S8 and S8+ have also officially gone on sale in Australia, with details of the Australian launch and all of the other S8 and S8+ articles published at iTWire here.

Issues for new smartphones aren’t a new phenomenon, as most readers would be well aware, with the most recent being infamously explosive battery problems with the twice-recalled Samsung Galaxy Note7 smartphone, a model which we reported will soon return to retail sale in South Korea, only as a refurbished model with a smaller safe battery.

Apple has had various issues over the years with its iPhones, including antenna issues, bend gates, crescent moon frame shifts on the front camera affecting some iPhone 6 models, Touch ID Error 53 and more, proving issues can happen to any smartphone maker.

Google’s Pixel and Pixel XL users have complained of problems with its fingerprint reader after upgrading to Android OS 7.1.2, while I remember reports of Motorola phones from two years ago having some reported overheating issues.

Readers may also have experienced previous phones they’ve owned temporarily overheating in the past, but in general, many of these issues get fixed by software updates and/or hardware replacements.

A couple of tweets on the issue can be seen below, with the second tweet expressing frustration at an S7 Edge software update issue. That is followed by some of the comments posted online at the Samsung US Community forum – the text below is a random selection printed verbatim.

@SamsungMobileUS what's up with these random restarts on my new Samsung s8? Could you look into it

@SamsungMobileUS Screw the S8. Fix the S7 Samsung. After Android 7.0 up grade my S7 freezes up then reboots, plus notification are intermittent.

usernIuF7YJ7aN:
Re: Galaxy s8 keeps restarting by itself

My S8+ is doing the same thing. It randomly restarts and then the SD card keeps popping up asking me to transfer files. But I don't want to transfer anything it's getting really frustrating. I have had the phone for less than 24hrs

Re: Galaxy s8 keeps restarting by itself
I am having the same issue with my s8. My phone keeps showing an unlock screen symbol on a black screen every time it restarts. It restarts every 30 minutes and is a true pain.

Re: Galaxy s8 keeps restarting by itself
There was an update yesterday. Even after the update I still had the same issue. We probably need replacements.

Re: Galaxy s8 keeps restarting by itself
My S8+ is also rebooting. I've had mine since Thursday. Its done it at least a dozen times that I'm aware of, usually when I'm not using it. Apps have rearranged themselves a few times also.

I've also had problems with my apps that I've sent to my sd card showing up as the gray android icon. This has happened even after using some of these apps that were showing up just fine. So far it's been a nuisance, but I'm getting concerned about it. I don't want to have to get a new one.

Re: Galaxy s8 keeps restarting by itself
I just spoke with customer service, and they advised me to turn my Samsung S8+ into safe mode and see if similar issues continue as i have similar problems. They feel (and i don't buy that) that its possible that issues with my programs that i transferred from my old Note 4. By turning safe mode those programs will be inactive and it will give me an indication if they are right or not.

Re: Galaxy s8 keeps restarting by itself
Mine is randomly going black screen with a padlock that unlocks on main screen. Then I'm forced to put in my pin code, the phone saying it's restarted. I too had transferred all apps and stuff from a Note 4

Re: Galaxy s8 keeps restarting by itself
Updates for all you guys here, I called Samsung e-Commerce department again today, and they give me 2 options. #1. Send in the phone for repair. (I didnt like this because why repair a NEW phone I purchased with full price, and it is only 1 day old. Plus the problems occurred (unexpectedly rebooting by itself) within 30 minutes I first turn on the phone, and it turned very often since Friday morning). #2. Send it in for full refund. I select option 2, so I can return and get full refund. If I ever buy the Samsung S8+ again, I will buy it thru the phone carrier, so I dont need to deal with all those phone calls that took me a whole Saturday morning.

Re: Galaxy s8 keeps restarting by itself
My Galaxy s8 was rebooting consistently 10+ times a day while doing various activities... games, e-mail, unlocking, sitting unused. Found one comment here (too many posts to refind it) that said they'd removed their weather widget and things seemed to stabilize.

I removed two weather widgets I installed and have now run 24 hours without a reboot! I have a high level of confidence that this is resolved! One of the widgets must have a nasty memory leak or something! 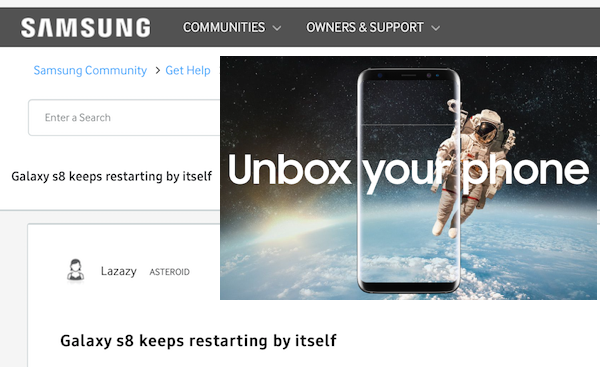 More in this category: « Motorola launch new Moto G5 Plus and G5 at AUD $449, $399 and $299 VIDEOS: Samsung launches Bixby for S8 and S8+ in South Korea at last »
Share News tips for the iTWire Journalists? Your tip will be anonymous