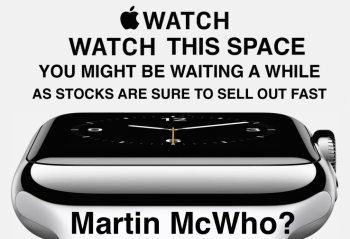 The iPhone was going to flop, do you remember? So too was the iPad, which was just a big iPod Touch. Do you believe Wall St?

Remember when the iPhone was going to flop? No 3G, no video calls, no cut and paste, no apps, no stylus, no removable battery, no SD card slot, no Adobe Flash.

Well, Apple just announced 700 million iPhones sold. If that’s a flop, can I please have some?

Michael Dell of the eponymous Dell Computer company once told Apple to close down and return all the money to its shareholders.

Now Apple is worth $700 billion US dollars and it heading towards a trillion dollar valuation, while Dell has had to branch into services because the PC market just doesn’t produce the profits it once used to.

Now, all the profits are with smartphones, tablets - and, oh yeah - Apple Macs. Apple’s Mac share has grown and grown for years now while PC market share has plummeted.

The big saviour for the PC market now is Windows 10, but the big winner there is Microsoft, not the OEMs.

Sure, we didn’t get the 12 to 13-inch iPad Pro at today’s launch. Perhaps that is coming in September when Apple normally launches iPads.

But we did get the world’s most power efficient computer, the MacBook, which also happens to be Apple’s slimmest computer - 13.1mm/1.31cm at its thickest point, and thinner at the other end - just 3.5mm/0.35cm.

Apple has had to redesign its batteries to take full advantage of the tiny space inside its case, and still its MacBook can deliver a full business day’s worth of compute time - 9 hours of Wi-Fi browsing and 10 hours watching iTunes movies - which you'd be doing on its glorious 12-inch Retina display.

Now comes an article from iTWire editor, colleague and boss, Stan Beer, entitled ‘Apple has produced a flop watch and the market agrees.'

Stan claims that ‘the market agrees’, but he lists only one person, the CEO of Forward3D, Martin McNulty.

Martin McWho? Is this Marty McFly’s dad from Back to the Future? His cousin? Has anyone heard of Forward3D? Is Forward3D a household name? Is Forward3D going to be obsoleted with Forward4D comes along?

However, Bloomberg has interviewed McNutly who says “I don’t know what problem this is solving because it only works if you’ve got an iPhone in your pocket. Imagine if the wrist watch had been launched and you had to have a fob watch in your pocket for it to work.”

Well that would be stupid. In fact this is such an odd statement I think McNulty’s name is spelled wrong. It sounds downright McNutty.

According to McNulty, unlike the iPhone 6, the Apple Watch will only sell to a small niche subset of the consumer market that will view it as a fashion accessory. McNulty believes that Apple’s best hope is to flog its dud device to 25-34 year old males in Asia who can’t resist gaudy techno knick-knacks.

But this is ridiculous. Apple made it very clear at its event today, which you can get the link to at my previous article here that Apple Watch is a precise customisable timepiece, a revolutionary new way to connect with others and a comprehensive fitness companion.

And that’s just the beginning, because Apple Watch also runs apps, with a mention of thousands apps already written for the Apple Watch - and that’s before anyone can even buy one! Even Woolworths, one of Australia's major supermarket chains, has an Apple Watch app, with the logo spotted during the keynote on an Apple Watch.

Note also how Apple talked about three specific use cases for the Apple Watch. This mimics the way Steve Jobs announced the iPhone, saying it was, from memory, a communications device, and iPod and an Internet access device.

Not a BlackBerry, not a Windows Phone, not an Android. But an iPhone.

Now comes the Apple Watch. It isn’t a watch, it’s a whole new computing platform. It is understandable that people who just think this is a tricked up LCD watch can’t see that a computer on your wrist - one that you can talk to, write on, draw on, remote control things with, stay updated with, read emails on, track your health with, improve your fitness with and plenty more isn’t just some shrunken down smartphone on your wrist.

It’s an entirely new paradigm, and those that can’t see it will be having huge servings of ‘claim chowder’ over the next few months and years as Apple Watch enjoys more success than even Apple could have dreamed of, where the Apple watch by itself outsells entire Android product ranges from competitors.

Of course, all of that is yet to happen, but let’s get back to Stan’s assertion. The market says it is a flop? Can we please have more than one unknown CEO talking head as an example of this?

But shifting Wall St isn’t the market Apple is truly interested in. Apple is interested in the REAL market - the consumer market. And now, the luxury market as never before.

So it is no surprise that Apple thinks the Apple Watch Edition, its most expensive model from $10,000 in the US and from $14,000 in Australia, will sell well over there.

Apple spending a stack of cash on an 18-page Vogue spread? Well where else would you advertise if you want to appeal to the world’s most fashion conscious people? The Trading Post? Gumtree? Craigslist?

Follow the money. The fashion money follows Vogue. Apple has hundreds of billions in the bank, so whatever cash Apple is spending to advertise in Vogue (reportedly $2.2 million) is just a drop in the bucket.

Come 24 April, Stan says he has ‘no doubt that there will be the usual queues outside Apple stores around the world, with the usual tech geeks lining up to get their hands on Apple’s latest gadget.’

However, Stan says, ‘for the Apple Watch that’s where it will end.’

That’s where it was supposed to end for the iPhone, too. And the iPad. But Apple’s future has no end in sight.

The truth is that Apple has just up-ended the smartwatch apple cart with a device that will sell more in its first month, if not week, than Android Wear sold in all of 2014 - which was 720,000 units according to Canalys stats.

With 700 million iPhones out there, and the Apple Watch compatible with the iPhone 5, 5C, 5S, 6 and 6 Plus, Apple has a huge market of its own customers to sell to. Indeed, the Apple Watch will spur more iPhone sales, seeing as you need one to use Apple Watch.

What needs to end is uninformed speculation from talking heads on Bloomberg and in Wall St who, time and again, get it wrong when it comes to Apple.

But not this time, and not today.

And that will be anything but the end, except perhaps for Martin McNulty's reputation as a wannabe Apple analyst.

It will be the beginning.