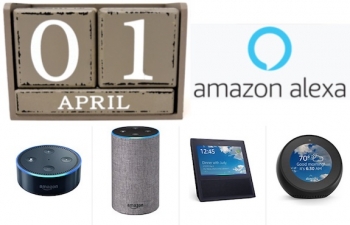 If you have an Amazon Echo speaker, which means you have Amazon Alexa, then the stage is set for foolish fun on 1 April with some fun pranks set to harmlessly stun the unwary and fool the fun-lover.

1 April is but three days away, and it will set the stage for all manner of nonsensical but somewhat believable stories, like Malcolm Turnbull finally deciding to resign due to 30 negative Newspolls and his sense of honour dictating that he had a spine and backbone after all, with his two primary "narratives" to be his parting gifts: commanding the NBN to go full FttP at long last and his (genuinely deserved and actually real) success at delivering same-sex marriage.

Another silly potential April Fool's story would be ALP member Ed Husic demanding Apple put its prices up, given the Aussie dollar has fallen well over 20% since the days it was once at and beyond parity, where Husic had demanded Apple put its prices down, in the name of consistency and, despite being a member of the ALP, not being a hypocrite.

Bill Shorten could be the subject of a fake 1 April news story where he saw sense and realised he needed to put the interests of the ALP first, rather than his own, and had decided to make way for Tanya Plibersek to become Australia's second female prime minister, with Anthony Albanese to become Deputy PM, but again, all of that is yet to be imagined for future 1 April stories to come.

However, with most of that above being 1 April fantasies (save for same-sex marriage in Australia, which actually happened), what is the world's largest online retailer, and arguably the world's largest cloud provider with hugely supported smart speakers going to get up to on April 1?

Well, with April Fools’ Day just three days away from the date of this article being published, we're reminded that "the mischievous among us are planning their yearly tradition of pranks around the house".

Not wanting to be a party pooper, Amazon tells us that "Alexa has some cheeky surprises up her sleeve when it comes to pranks this year that we wanted to ensure you’re across".

You can start off by asking Alexa "when April Fools’ Day is, and she might tell you that it’s been cancelled this year due to poor attendance".

"Ask her to prank you, and she’ll (jokingly) order you 67 large pizzas from Domino's Pizza, cancel Easter due to a world-wide chocolate shortage, or switch to French!

"You can also ask Alexa for some April Fools’ inspiration to see what she comes up with."

Now, here is a full list of "utterances" for you to try out if you have invited Alexa into your life, so why not try them out and have some fun?

Try these utterances with Alexa:

So, it's great to see that Amazon has a sense of humour, and those with Google Home and Apple HomePod devices might want to try similar questions with their devices to see if Apple and Google are also going to have fun with the day.

Alexa has some great answers, but Apple and Google have definitely been pranked by Amazon's quick thinking. After all, I asked Google and HomePod some of the questions above, and here are some of their answers:

I said: "Ok Google, Happy April Fool's Day" and she told me "Sorry, I don't know how to help with that."

When I asked Google "What will you be doing for April Fool's?", I was told "Sorry, I don't understand."

Maybe Google and Apple will now race to imbue their respective intelligent assistants with some April Fool's Day awareness, and if not this year, then perhaps they'll both prank us the next, and it's great to see Alexa's programmers at Amazon have a funny bone – and aren't April Fools. :-) :-) :-)

Until then, we await Malcolm Turnbull's richly deserved and highly anticipated resignation speech, and that's no joke! 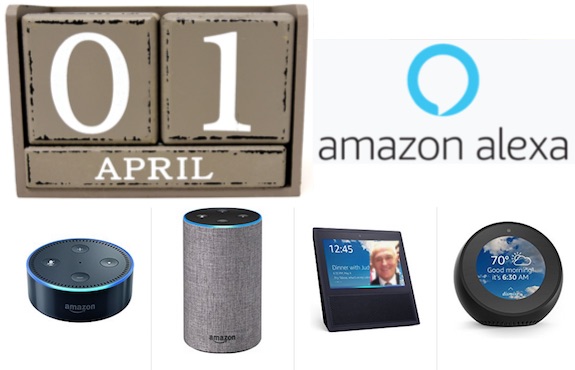 More in this category: « Telstra Business Awards site 'ReCaptcha' crash prevents last-minute nominations Greens want more electric cars, but will they become too expensive to drive? »
BACK TO HOME PAGE
back to top