2014 was the year of Apple: AppleInsider Featured 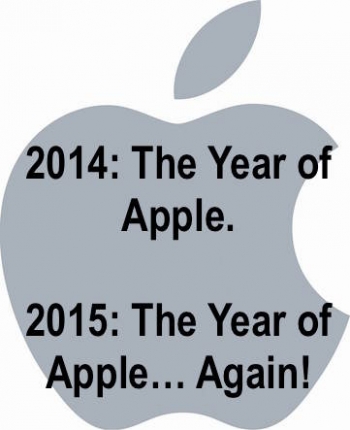 Daniel Eran Dilger, the spot-on Editorial writer at AppleInsider, has called it: journalists were wrong about Apple in 2013, 2014 was Apple’s year, and 2015 will be Apple’s crunchiest yet.

Although many people seem to love to hate Apple, the company has gone from strength to strength in 2014, making all that nonsense about Apple being 'The Haunted Empire’, lost without Steve Jobs, a bunch of inaccurate, mean-spirited spiteful clickbait.

An excellent wrap-up of Apple’s 2014 can be found at AppleInsider, where noted Apple watcher Daniel Eran Dilger has written up a comprehensive take entitled: “Editorial: the world revolved around Apple, Inc in 2014’.

Dilger, whom I’m never met nor spoken to in any way, shape or form, but have read extensively over the years, did me a favour by linking to my article, in his, entitled ‘Asymco’s Horace Dediu says Apple IBM partnership ‘the biggest news of 2014’.

I had read Dilger’s article earlier in the day, but hadn’t realised he had linked to my story (which was really just a pointer to Dediu’s own excellent analysis) until I saw some unexpected traffic from AppleInsider in iTWire’s stats.

I had planned on writing up a story about Dilger’s story, seeing as I wholeheartedly agreed with it, and wanted to send him some much-deserved traffic - not that he needs it from me, given AppleInsider’s popularity.

This was before I had noticed he’d linked to one of my stories. However, I’m doing it now, after I have seen the link, but I was going to write it anyway, so it’s a nice, welcome and unexpected bonus - it’s nice to be linked to on the Internet, especially from a site of AppleInsider’s calibre, and a writer of Dilger's calibre.

Anyway, Dilger’s story is definitely ‘must-read’ - whether you’re an Apple fan, or not, and especially if you’re an Apple hater, because it lays down the facts on the tremendous success Apple has enjoyed in 2014 - and lays out the reality that Apple’s ‘performance sets up the company with enormous potential in 2015’, as Dilger ends his article.

Dilger made no mention of 2015 being Apple’s 'crunchiest' yet - that’s just one of my favourite ways of describing Apple. The ‘Captains of Crunch’, and all that, as I've said for years in many, many articles.

But it’s what Dilger is alluding to. 2015 is going to be a massive year for Apple. It will finally launch its long-awaited and long-rumoured Apple Watch unto the world, which it demo’d earlier this year (as I write this article on New Year’s Eve 2014).

It is expected to launch a brand new 12-inch MacBook Air with Retina display, and a rumoured new notebook design.

The iPhone 6S and 6S Plus will launch in around 9 months time to what you'd imagine will be great '6S success'. The iPad Air 4 will arrive with who knows what kind of blockbuster new features. We’ll see the A9 chip - Apple's 3rd-generation 64-bit ARM chip, just as Qualcomm rolls out it first true 64-bit ARM chips. We may well see a 12-inch iPad Pro, if this device isn’t in some way interlinked with the expected MacBook Pro 12-inch.

A successor to OS X Mavericks will presumably arrive, as will iOS 9 - hopefully a lot more bug-free than iOS 8 has been in terms of the Safari browser and third-party keyboard support when opening up iOS Spotlight. That said, we'll see iOS 8.2 first, in time for the Apple Watch launch in February or March 2015, hopefully with those bugs squashed long before iOS 9 comes onto the scene.

But all of that is yet to come, and as Dilger explains, 2014 has been an incredible year for Apple, with Apple absolutely smashing all the doom and gloom predictions from 2013 into cosmic dust.

More in this category: « Revealed: supposedly uncrackable encryption tools still not safe Nifty MacBundler deal - 10 Mac apps for US $10 »
Share News tips for the iTWire Journalists? Your tip will be anonymous