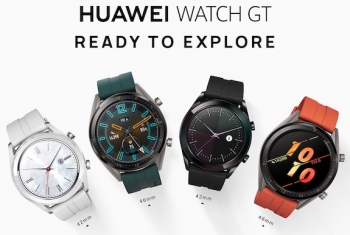 With the help of multi-Gold Medal winning Olympian Sally Pearson, Huawei has launched two new models in its existing Watch GT range in Australia, one for the active user at the larger 46mm size, while an elegant new 42mm model for smaller wrists has also arrived.

Huawei's new Active and Elegant Watch GT models are new models of the Watch GT range the company launched last year, with the same internal hardware but with new stylings, and some new watch faces.

That means up to two weeks of battery life, which is very noticeable when compared to the Apple Watch and its 1+ day of battery life, although the two watches are very different, despite by necessity also having a range of similarities.

Naturally, Huawei talks up the Watch GT's activity tracking and fitness coaching, and in this regard, it definitely excels.

Before we get to more details of the 64mm Watch GT Active and the 42mm Watch GT Elegant, here is the full video of both models launching in Australia last week, featuring a great interview with Australian Olympian Sally Pearson, who has won eight gold medals and is preparing for Tokyo 2020, and who is nowadays her own coach, too, as she explains.

So, what are the fitness and activity tracking features that the Huawei GT Watch offers?

There are running courses that cover a run or walk, two types of fat burning runs, and a MAF180 run, which I see online being billed as "the safest newbie running training method", with MAF nothing to do with being married at first run down the aisle, but the "maximum aerobic state".

Then there's an outdoor run, an indoor run, and outdoor walk, a climb, a trail run, outdoor cycling, indoor cycling, a pool swim, an open water swim, a new triathlon mode, and then other types of exercise, for which the icon shows what looks like a hula hoop but what I think is meant to denote moving your hips around in a circular motion.

There's also GPS tracking built-in, which is useful for those that wish to properly track their runs on the map.

There are two buttons on the side, both of which can spin like a crown but only respond to being pressed in. Perhaps a future version will enable a spinning crown to navigate through menus like the Apple Watch, but in this version, they don't.

Pressing the top button activates the watch face, which can also be activated by raising your wrist to look at the watch.

Tapping the watch face does not activate the screen as it does on an Apple Watch, but given your watch is normally attached to your wrist, and raising your wrist to look at the time is a natural thing, this is ok, but I did wish it was possible to tap the screen simply because I can do this on the Apple Watch and I expected it, but hey, it's not the end of the world (or your fitness aspirations).

After pressing the top crown the first time, you can press it a second time to bring up a list of apps that you can use your finger to scroll up or down with.

Here you see the Workout app, the Workout records app, the Workout status app, the Heart rate app (which you can set to continuously record your heart rate, unlike the Apple Watch which, in its current incarnation at least, takes readings at several minute intervals), an Activity Records app, a Sleep app, a Barometer, a Compass, a Weather app, a Notifications app, a stopwatch, timer, alarm, flashlight (which turns the screen a bright white), a Find my phone app and a Settings app.

The Watch GT can show various notifications from various apps, the most obvious of which is your SMS messaging app, and it can also display incoming phone calls, but as the Watch GT has no microphone or speaker, you can only choose to hang up on calls and not answer them.

Indeed, the only watch face that is customisable is the newest one, with the neon colours for the numbers denoting each hour of the day. This is a 24 hour watch face and can also show a second time zone, which replaces the heart rate complication.

Huawei has produced regular updates for its watch, so the company can clearly produce more apps, more watch faces and introduce more customisability if it desires, and hopefully this happens in the future, simply because it is great to be able to customise your watch to better suit you.

While Apple also only offers a set number of watch faces, these are very customisable in terms of the great number of complications you can display on most faces, and this would be useful for Huawei to be inspired by.

When Huawei previously made a Google Wear OS watch, it too had endlessly customisable watch faces, but like the Apple Watch, the Google Wear OS Huawei Watch (which also came in a 4G LTE version) had only a day or so of battery life.

This is where Huawei's Watch GT differs. By offering a curated experience that doesn't use Wi-Fi, doesn't offer an App Store, doesn't make phone calls or give access to Google Assistant, and focuses on continuous heart rate monitoring as well as a range of fitness functions and features, it has up to two weeks of battery life.

If you turn off continuous heart rate monitoring, you can extend battery life further, and for those that want a watch they can use for days and days without recharging it, this is definitely an attractive feature.

Indeed, I was able to get 10 days of battery life on the Watch GT Classic launched last year, and while that wasn't quite the two weeks promised for the 46mm Watch GT, it was well within the "up to two weeks" advertised, and, as noted above, very noticeable compared to the Apple Watch.

The 42mm Watch GT Elegant model is smaller, so this means a smaller battery, with up to 1 week of battery life promised.

That said, and it is important to note, the Apple Watch is a smartphone, Siri-assistant capable, app-running smartwatch with a range of fitness features and more, with first-class ecosystem integration with iPhones and AirPods, but at around twice the price, its price reflects its feature set, and its shorter battery life does, too.

The Watch GT works on any Android or iPhone with the Huawei Health app, so it will work with any modern smartphone.

Both models will be available from late August at Mobileciti, which can be seen at the Huawei Watch GT website, with more retail partners to be announced.

“We believe this is the perfect companion for Aussies who are always on the go. The Watch GT series has already drawn much acclaim globally for its ultra-long battery life, sophisticated activity tracking and fitness coaching.

“We have seen huge interest from consumers across the world, with more than two million Watch GTs sold since October last year. The incredible sales of this watch makes Huawei one of the top 3 global smart watch sellers in the world and we are excited to launch the latest devices in Australia.”

Referencing leading analyst firm IDC's data report for global wearable vendors in the first quarter of 2019, Huawei said it has achieved "year-on-year growth of +282.2 per cent compared to the same quarter last year, shipping five million units in total which puts it among the top three global wearable vendors."

Huawei's media release notes that "from running a marathon to commuting to work, the HUAWEI Watch GT caters to Australians’ busy lifestyles.

"Boasting a long-lasting battery life with typical use – Elegant up to one-week without charge, and Active a whopping two-week battery life – both editions feature a low-energy, dual-chipset system and intelligent (AI) power-saving algorithm, allowing consumers to switch between performance and efficiency modes, ultimately maximising battery life.

"Durable and difficult to scratch, the HUAWEI Watch GT is slim and stylish. Featuring a Fluroelastomer strap to both improve the watch’s overall texture and create more durability and comfort, the HUAWEI Watch GT also comes in variety of watch faces to suit every occasion – from the gym to a cocktail party.

"To create the Magic Pearl White watch face, the watch undergoes a diamond-level cutting process that creates 48 small triangular cuts and is then precisely polished. When reflecting light at different angles, the face portrays an array of different colours.

"With the TruSeen 3.0 heart rate monitor, it can track your heart rate 24-hours a day in real time and with high precision. In Sport mode, the Watch GT allows individuals to adjust their workout’s intensity based on a pre-set target. In rest mode, the smartwatch can automatically monitor and record resting heart rate.

"The HUAWEI Watch GT allows users to better manage their health with smart tracking capabilities for a range of daily activities such as walking, and even sleep. With TruSleep 2.0 smart sleep technology, the smartwatch allows users to monitor sleep quality and accurately identify typical sleep issues.

"The smartwatch can also offer over 200 suggestions for the improvement of sleep quality through real-time heart rate monitoring, sleep breathing and smart data analysis."

Both models will retail for A$399

Here are the key features of the both new HUAWEI Watch GT models:

BACK TO HOME PAGE
Published in Watch
Tagged under

Share News tips for the iTWire Journalists? Your tip will be anonymous