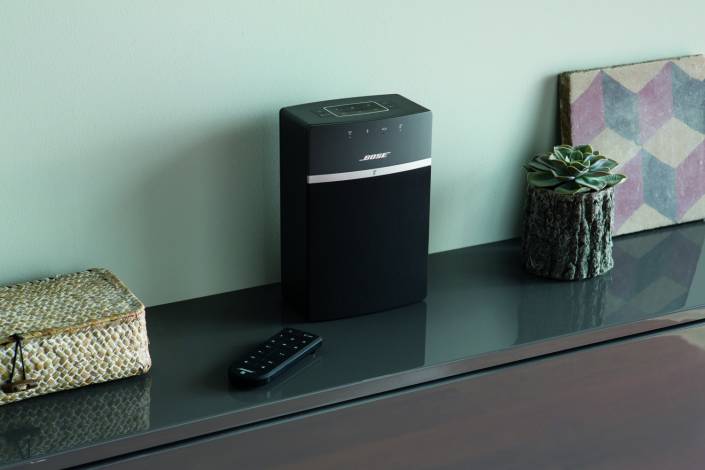 Bose has introduced new Series III SoundTouch 30 and 20 models while introducing a new SoundTouch 10, too, all with Bluetooth, Wi-Fi and multi-room flexibility.

Bose has always been well known for alpha audio quality, and despite any number of competitors and claimed audio innovations, Bose has not only retained its reputation but has enhanced it through ongoing new products and capabilities.

With the convenient addition of instant listening through Bluetooth, full multi-room integration, upcoming Spotify integration and more, Bose is also adding a new SoundTouch 10 model, which is either ideal on its own, you can add more over time, and mix and match them with other SoundTouch systems as desired.

The new SoundTouch systems are also backwards compatible with earlier models that featured Wi-Fi only. With Bluetooth, you can stream any song, playlist, music service, and YouTube directly from your phone or tablet to a new Bluetooth-equipped SoundTouch, and broadcast it to as many SoundTouch speakers you have via Wi-Fi, including the older Wi-Fi only models.

Bose also announces two wireless music system ‘firsts’ with Spotify, available early next year. In addition to Spotify Connect - which lets you control any SoundTouch system from the Spotify app - Spotify will also be integrated in the SoundTouch app. And

The Bose website will also offer ReadySet with Spotify, so you can preload any SoundTouch system with Spotify playlists.

John Roselli, GM of Bose Wireless Speakers said: “SoundTouch has always been about the experience - what listening to streaming music at home should be like.

“We engineered everything around that simple idea. So, SoundTouch systems are easier to use than anything else available, they sound incredible, and now they let you listen to anything from your phone or tablet in as many rooms as you want. There’s nothing else like it, and the SoundTouch 10 is a great way to get started.”

As was demonstrated at the Bose media event, the resulting performance is remarkable, with Bose describing the SoundTouch 10 as playing ‘cleaner, deeper, and louder than any single speaker of its stature.’

Here is the Bose presentation on the SoundTouch 10, after which this article continues - please read on!

Naturally, Bose says they’re all immersive for movies and TV and double as wireless music systems.

As Bose explains, its SoundTouch systems are effortless, and billed as ‘the easiest, most versatile home wireless music systems available today.’

Bluetooth lets you directly connect any SoundTouch to your phone or tablet right out of the box, while with Wi-Fi, they’ll send whatever’s playing to multiple SoundTouch speakers at long range.

SoundTouch also has ultra-popular music services built in: Spotify, Pandora, iHeartRadio and Deezer, which each accessible through the easy-to-use SoundTouch app.

With just a few taps, the SoundTouch app turns your phone or tablet into a powerful controller, letting you listen to the same music everywhere, or different music in different rooms, but SoundTouch systems offer even more freedom.

The app lets you set six personalised presets to any music service playlist, artist or internet radio station, and change them whenever you want. Each time you do, every SoundTouch speaker in your home remembers them automatically, so when you don’t want to use the app, you won’t have to.

Just press a corresponding button on the SoundTouch speaker or the included remote, and with that one touch, your music starts playing - no phone needed.

You could be charging your phone, texting on it, taking a call, turning it off, or never taking it out of your pocket or bag, making filling the room with your tracks in just a second as fast and simple as turning on a light.

And, with the new inclusion of 802.1n dual-band (2.4GHz and 5GHz) Wi-Fi, Bose says the SoundTouch connection is stronger and more reliable with less interference and drop-outs.

The addition of 5GHz compatibility also offers a better streaming option in crowded environments like apartment buildings in the city.

So, what are the details on the coming enhanced Spotify integration?

Early next year, Bose says its new features will make SoundTouch systems the best way to listen to Spotify at home, thanks to new in-app integration with Spotify alongside Spotify Connect.

From the SoundTouch app you’ll be able to search for any song, album, artist, or playlist from Spotify or Spotify users, and from the Spotify app, you’ll control SoundTouch systems directly.

In addition, switching from the SoundTouch app to the Spotify app is seamless, meaning you’ll pick up wherever you left off.

The new ReadySet with Spotify feature will also be available on the Bose.com website with any SoundTouch system purchase. ReadySet lets you use your existing Spotify account or sign-up for one, pre-load SoundTouch presets with Spotify playlists, and have your SoundTouch speaker arrive customised, programmed, and ready-to-go.

John Spinel, Spotify’s VP of Global Business Development said: “The home is one of the places where we want to deliver music fans innovative experiences. This partnership with Bose enables us to provide users with a ready-to-use music experience in the home, which blends Spotify's favourite features and playlists with Bose's innovative technology and incredible sound quality.”

Boss’s John Roselli added: “SoundTouch systems are a great example of what we care about. We obsess over the big and little details that no one else has, and that includes our integration of Spotify. With SoundTouch, you’ll be able to play it through Bluetooth, from our app or theirs, or at the touch of a button. And that gives the millions of Spotify users all over the world more flexibility and control than they’ve ever had before.”

So, what does it all cost in Australia?

Early next year, in-app Spotify integration will be included in new systems and available to existing SoundTouch customers via a free software upgrade; and ReadySet with Spotify will be available at Bose.com.au with any SoundTouch purchase.

Here are three Bose videos on the SoundTouch systems and app in operation:

More in this category: « Enhanced Harry Potter books magically come to life on Apple iBooks The numbers are in and not looking good for Foxtel »
BACK TO HOME PAGE
back to top