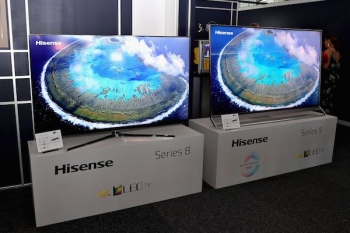 After announcing its new Series 8 and 9 ULED 4K TVs at the Australian F1 Grand Prix in late March, Hisense’s newest flagship models have now arrived in stores at last.

iTWire last wrote about the new Hisense TVs on 27 March, when their impending arrival in Australia was announced, with an expected launch timeframe from approximately July.

That date slipped a little to August, but the Hisense 65-inch Series 8 and the 75-inch and Quantum Dot-enabled Series 9 ULED TVs have now arrived at JB Hi-Fi, Harvey Norman, The Good Guys, Radio Rentals, RT Edwards and Bing Lee stores across Australia.

Naturally, Series 8 and 9 are Ultra HD 4K capable, with Series 8 features HDR Plus, and Series 9 offering HDR Supreme - the difference between these two HDR modes is explained below.

At the end of this article are three videos, the first of which goes into more detail on both models at a launch event for media on Friday, 18 August at The Old Clare hotel in Chippendale.

Now, as you’d expect from both new models, there are a range of other advanced features that Hisense hopes propels its brand into the upper echelons of top TV branding, and price ranges, thus “re-affirming the brand’s position at the high end of the home theatre spectrum".

Andre Iannuzzi, head of Marketing at Hisense Australia, said “consumers can expect to be wowed by by these new models”, which include “the brightest TV on Hisense has ever made".

“At Hisense,” continued Iannuzzi, “we’re committed to pushing the limits of ultra high definition display technology, and we’ve been able to do that with our new range. The Series 9 ULED is currently the brightest display we’ve ever manufactured, testing at 2200 nits. This level of brightness enhances the viewing experience by creating vivid, lifelike colour-scapes that feel like they’re popping out of the screen.”

We can expect to start seeing Hisense’s global “See The Incredible” ad campaign, with the YouTube video here, which the company bills as capturing “the mind-blowing, immersive experience consumers have had with their Hisense 4K ULED TVs".

I was able to binge watch several episodes of Marvel’s Daredevil Season 2 on a 65-inch Series 8 Hisense TV, and while the bandwidth on the connection I was using maxed out at 15Mbps, which was delivering a 2K picture rather than a 4K picture, I was able to experience the HDR compatibility and what was obviously a very sharp and very colourful image.

It was certainly a lot more enjoyable watching on this big screen, with its responsive and fast Netflix interface, than it was watching on my 2013 MacBook Pro screen for rest of the episodes I binge watched over the last couple of days, but then a 13-inch Retina screen compared to a 65-inch 4K screen with HDR is not a fair comparison – there’s no question the 65-inch screen will look stunning, even though I absolutely love my Retina display for my daily computing.

The Daredevil Season 2 binge watching was done in an overnight hotel stay at The Old Clare hotel in Chippendale, which was the old Carlton United Breweries location in times gone past, per Hisense’s invitation, to get a closer look at the new models.

The TV normally installed in the room was replaced by a Series 8 65-inch Hisense TV, preloaded with a working Netflix account, and an Xbox One S with 4K Blu-ray player, but I was so engrossed in getting into Daredevil Season 2 (which I had been putting off for too long), I simply enjoyed the spectacle on a fabulous 65-inch TV.

My experience can’t be classed as a full review, as I wasn’t in front of the 65-inch Hisense TV for the length of time required for that, but in the few hours that I was in front of it, there’s no question we’re talking about a polished TV, with a polished software UI, and a TV and panel that goes beyond the sub-$1000 TVs out there.

Clearly, Hisense wants to be seen and compared with the Samsungs, LGs, Sonys and other high-end models out there, and you’re naturally advised to do your own homework and research to compared the screens, picture qualities, HDR modes and prices for yourself, but at the very least, Hisense is definitely a contender — and wants to appeal to your “hisense and hisensibilities” — and yes, that’s my own mangling of the language, and not Hisense’s!

For Series 8, Hisense lists the following:

Netflix up to 4K HDR:
Netflix is the world’s leading Internet subscription service for enjoying TV shows and movies up to 4K HDR. Instantly turn on Netflix with a built in button straight on the remote.

Intuitive and Industrial Design:
Solid stainless steel bezels and stands turn these TV from an appliance into a feature.

For Series 9, Hisense lists the following:

Quantum Dot Technology:
The display is assembled using phosphorescent crystals that produce the brightest and most accurate colours, making your pictures you see on our television set look almost as crisp and beautiful .

Ultra HD Premium Certification:
Quality compliant with the world standard in UHD technology. Developed with the consumer in mind, it provides them with information on premium UHD devices and content to deliver best-in-class home entertainment.

VIDAA U and Netflix up to 4K HDR:

As above with Series 8.

Below are the three videos I recorded at the Hisense event:

The first features the introduction of both new models, but all three videos also feature two separate magic experiences from Matt Tarrant, a contestant from Australian Survivor, but also a mentalist, magician, hypnotist and entertainer, who brought Hisense’s “Incredible” theme to life.

As you’ll see in the second video especially, Tarrant had a great “mind reading”-style experience which resulted in a lotto ticket in a box featuring the very numbers voluntarily offered up by the crowd, with one number from myself. I can attest to the fact I didn’t know who the heck Matt Tarrant even was before the Hisense event, so quite how his lotto ticket had the number I offered up, along with the numbers from others in the crowd, is a mystery.

You’ll see it in the second video below, but all three videos are embedded below.