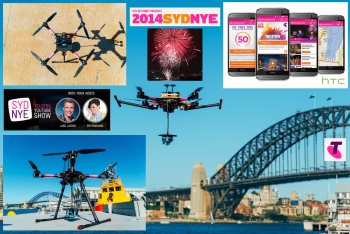 Telstra’s specially-built NYE drone will capture 360 degree views of the Sydney Harbour fireworks to be streamed ‘post event’ to the world, free, through its free Sydney NYE Telstra App.

The race for the best spots around Sydney’s Harbour may well have started at 6pm last night as people slept under the stars, with thousands of people already queuing at Mrs Macquarie’s Chair according to radio reports.

But not everyone in Australia or on Planet Earth can be there in person to see Sydney’s stunning fireworks display, one of very first cities worldwide to reach the new year first due to time zones, but the world no longer needs to rely on snippets broadband on CNN to see what things were like.

Of course, people will record part or all of the display and put it on YouTube, and there WILL be a live stream, too, from Telstra starting at 8.30pm - as you’ll see in the links below near the end of the story - but what about a stunning new way to capture and display the fireworks extravaganza?

Well, Telstra is making it easier for the world to experience that thanks to its ‘specially-built drone [that] will fly through the sky at midnight, capturing 360 degree views of the pyrotechnics display to be broadcast via the Sydney NYE Telstra App post event’.

As Telstra says, this will ensure ‘audiences throughout Australia and the world will have the opportunity to witness the spectacle of Sydney New Year’s Eve.’

Now, this drone isn’t the phantom menace of some attack of the cheap drones sticky taped with a few Go Pros. Telstra’s NYE Drone has been expertly outfitted with ‘six high definition (HD) cameras which will capture 360 degree views from a height of 1000ft above the harbour.’

Telstra’s Creative Partnerships GM Nicola Reeves said ‘the Telstra NYE Drone will help create a brilliant personalised experience which allows users in Australia and overseas to feel like they’re right in the heart of the action on Sydney Harbour.’

Reeves says: “It’s very rare that we get the chance to see the fireworks from a bird’s eye view and we are thrilled to be providing the technology to allow audiences from across the globe to connect with and experience one of the most iconic New Year’s Eve events in the world.”

The Sydney NYE Telstra App gives you ‘the ability to select different views and camera angles with an easy turn to the left, right or by spinning around.’

The app also lets ‘users with an Australian mobile number to pre-load up to 50 standard SMS that Telstra will send for free from midnight local time and will also feature news updates, interactive elements, maps and other popular services.’

Telstra has a demo of how the app will work in a YouTube video we’ve embedded below:

Presumably Telstra has received all the necessary flight approvals for its flight of fancy - it hasn’t mentioned one way or the other, but there’s no way Telstra would be winging it and flying by the seat of its pants for this cracking event without having at least first raising a trial balloon with CASA or whoever the applicable authority is.

Mini update: A Telstra spokesperson confirms, as expected, that Telstra definitely has all the 'relevant approvals from authorities to fly the drone'.

The only people who might be peeved are Windows Phone and BlackBerry users, as the Sydney NYE Telstra App is available for iOS users at the App Store and Android users at Google Play, with more info and download locations available at Telstra’s NYE site here.

But don’t worry, Windows Phone and BlackBerry owners, you (and everyone else) can ‘live stream Telstra’s ‘Sydney NYE Telstra YouTube Show’ both from the Telstra NYE site listed above and at this direct YouTube link here.

As Telstra’s description states, the live stream will let you ‘experience all the fun, fireworks and full-on entertainment live from Sydney’s New Year’s Eve celebrations’ with hosts ‘Luke Jacobz, Em Rusciano, Jules Schiller and Anna Teslik as they count down to midnight with special guests Troye Sivan and Tyler Oakley.’

So… tonight’s celebrations will really go off with a bang, whether you watch live in person, via a live stream or via Telstra’s drone-filled fireworks laden app!