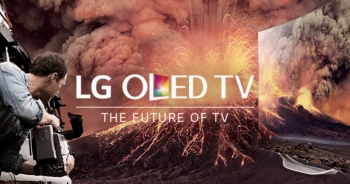 LG is seeking to claim dominance in the Australian TV market with a massive range of new televisions, featuring OLED, 4K UHD and LED LCD TVs in all the sizes from 32-inches through to a 105-inch model on the way.

However, there was no OLED 4K UHD television launched, which is still due to arrive sometime later this year despite a demo OLED 4K UHD model being shown off late last year.

The company has also promoted its Netflix compatibility, having worked with Netflix since 2012 in the US to have its range Netflix certified.

LG is hoping that consumers will not only upgrade to larger size TVs, but also the latest generation 4K Ultra HD models - especially for those that have been waiting for 4K technology to cycle through a couple of generations first.

1. LG’s next-gen 4K UHD range now comprises 66% of LG’s 2015 lineup, with one of its flagships, the UF950T series, offering ‘ColourPrime’ technology, promising 20% better and richer colours than ‘conventional’ TVs, although only as LED/LCD 4K UHD models, not OLED 4K models.

2. Ultra Luminance technology - designed to enhance the lightest and darkest parts of displayed content - the example given is of city scenes at night.

3. A 6-step upscaler which is across LG’s 2015 4K UHD range, designed to bring lower-res content as close to 4K resolution as possible. Naturally this will depend on the quality of the source content - if you’re trying to upscale a 360P YouTube video or a converted VHS recording, it’s not going to look as good as upscaled 720P or 1080P content, but it is LG’s best upscaling technology yet.

4. WebOS 2.0 - the latest version, offering what is arguably the best Smart TV experience available, and with quad-core processors in most of the range, boot-up times are faster than before, multi-tasking apps is naturally smoother, letting you access the on-screen Smart TV menu without interrupting what you’re watching.

6. LG is also promoting the fact it’s the only company to offer OLED, 4K and LED/LCD technology in the Australian market at the same time - including, of course, Curved TVs - but still no OLED 4K UHD TVs which are still to come to Australia, curved or otherwise.

7. LG is touting OLED TV as being ‘affordable’ and ‘the future of TV’, and is ‘asking consumers to take the OLED Challenge in store’ to see for themselves.

“Our customers are at the centre of our focus at LG and we understand they have a wide variety of preferences when it comes to purchasing a new TV. That’s why we’re proud to be the only company in the TV market to offer these three types of technology for them to choose from – OLED, 4K Ultra HD and LED/LCD.

“We’re aware it’s not just the size of the screen that matters, it’s also the quality and resolution of the picture – and that’s why our 4K Ultra HDs are proving so popular; they’re simply incredible to watch.”

Naturally there will be competition at retail level, although prices aren’t initially likely to drop much right at launch if at all - you’ll have to see what the usual set of retailers do in that regard.

You can see the prices and specs of LG’s new TV here - this page takes you to the new 4K range but the other categories are listed on the left. A table with full pricing is below.

LG has launched a new H4 (NP8350) Portable Music Flow speaker - LG’s first with Wi-Fi, while ‘Motion Play’ technology in the new range uses low-energy Bluetooth technology to detect which room you’re in so music is played to the closest speaker - unless you want music across all speakers at the same time.

Price is $279 with four hours of battery life, acting as a standalone Bluetooth speaker when out of Wi-Fi range and connecting seamlessly to Music Flow systems when in Wi-Fi range.

Below is the pricing table for LG’s new 2015 TV range, as well as a table showing which LG TVs from 2012 onwards are now compatible with Netflix.

Following these two tables are my notes from the presentation, mostly notes of what LG’s Grant Vandenberg and Bruce Leigh were saying: 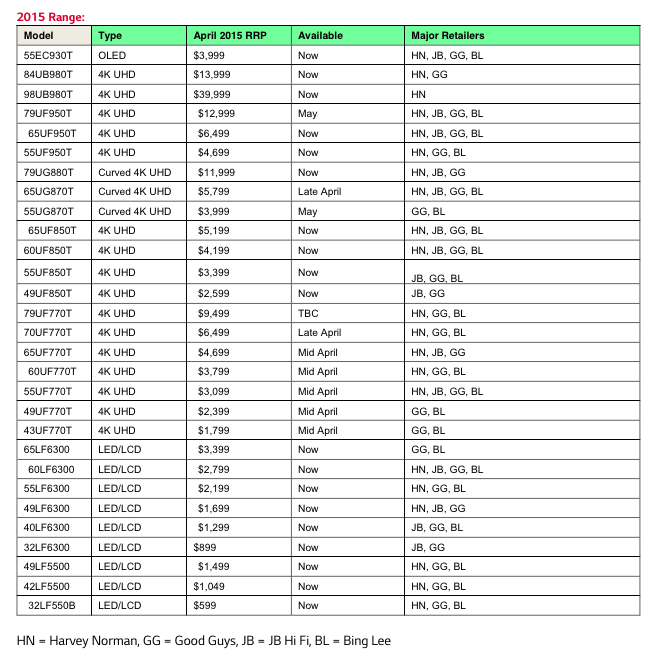 Notes from what LG’s Grant Vandenberg and Bruce Leigh were presenting at this morning’s LG 4K UHD TV 2015 range launch:

4K didn’t exist as a segment two years ago.

When Australian consumers are confronted by new tech they adopt it and get on board.

Here are the numbers of new TVs from LG in 2015

LG ColourPrime delivers more colours than ever before. - over 20% more colours with colour prime than convention TVs.

Can be activated with the colour gamut setting.

4K TVs this year - ultra luminance technology. Analyses brightest and darkest part of the content - city scenes at night, star scenes - great if there’s a bright light coming out of a dark background.

The next thing is the field refresh rates - 100Hz and 200Hz depending on the model.

Netflix. Big news for us and the industry. Will change - the start of a new thing - consumers can watch 4K footage - if they have 25Mbps - they can connect directly to Netflix and watch content in 4K resolution such as Marco Polo and more in UHD.

Netflix and LG - range of TV certified by Netflix, back to 2012 models.

One TV here is set up with Netflix - the curved UHD TV. We have a modem here capable of delivering 25Mbps speeds for 4K resolution - it will downgrade to Full HD. Either way it gives a great resolution.

Freeview Plus is the other content partner of note.

Film your own 4K content. Go Pro camera - Go Pro Hero 4 designed to capture 4K footage. Go Pro app - LG is the only major TV manufacturer in Australia to have it. Doesn’t have 4K footage but does have Full HD footage.

LG G3 also captures 4K content. Film your kids playing soccer or favourite event on your phone and watch on your 4K TV.

All of these things combined will really drive the category.

6 step upscaling across the entire 4K range. The most powerful upscaler ever. Brings it close to 4K resolution.

When you want to switch between devices. My channels feature.

All sizes have WebOS 2.0

LG asking you to compare OLED in the store - which one looks better?

Spent $3m in advertising over the past 6 weeks. LG a major sponsor of the cricket world cup. The final was the most watched cricket game in the history of Australian cricket. 4m people tuned into the coverage.

A lot of people now familiar with OLED just in the last six weeks.

LG is the only manufacturer offering three different types of tech to consumers - OLED, 4K OLED and LED/LCD.

6 key reasons why LG is different this year - where technique meets technology.

Sets the standard in Smart TV

TV sound is making a comeback. All those years of tiny speakers in super slim bezels has had an impact on sound quality

But now Harmon Kardon speakers in LG TVs dials up the sound quality.

However LG accessories such as Sound bars can really come into their own.

AV range is moving with the times and the latest trends.

75% of LG AV products now geared towards the trend in better audio.

LG Music Flow Sound Bars - LG is one of the few companies that deliver a total home audio solution.

More in this category: « Halo 5: Guardians guarding the Xbox One galaxy in October Find your favourite movie or TV show - legally »
Share News tips for the iTWire Journalists? Your tip will be anonymous