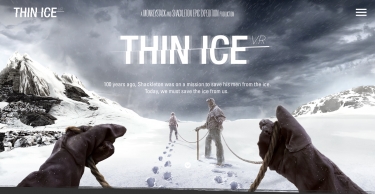 Three years in the making, Thin Ice VR is a groundbreaking virtual reality production using world-first technology to retrace Sir Ernest Shackleton’s famous 1914 Trans-Antarctic expedition, highlighting the devastating impact of climate change over the past 100 years - and it will be airing later in 2021!

The world premiere of Thin Ice VR, which has been three years in the making, was due to take place during the Adelaide Film Festival at Illuminate Adelaide, but due to the current snap COVID-19 lockdown in South Australia, the premiere has unfortunately been postponed.

Illuminate Adelaide's website explains "We hope to be able to restart as soon as restrictions are lifted and will advise members of the public accordingly," so unless we all need to move to Antarctica to freeze the virus out, Thin Ice VR's premiere will stop being on thin ice and its launch will be on solid ground!

Even so, this spectacularly unique production offers an unrivalled immersive experience, allowing audiences to follow in the footsteps of Tim Jarvis, who recreated Shackleton’s famous expedition (which aimed to be the first to cross Antarctica coast-to-coast and became, what is now regarded by many as, the greatest survival journey of all time).

It was during this modern-day recreation that Jarvis discovered alarming changes in the region’s landscape – a direct impact of climate change, and this production deserves to get all the publicity it can get, and it will no doubt be a huge success when it finally does launch.

Indeed, back in February 2020, I was in Adelaide, and was able to interview James Calvert about the production directly, which I'm now embedding below to whet your appetite - the article continues thereafter, so please read on!

So, what is more detail about Thin Ice VR?

Well, we're told that it is "equal parts catastrophic and transcendent", and thus presents a unique account of how humanity asserts its will over the extremes of nature — often in unforeseen ways.

The intention of Thin Ice VR is to create meaningful awareness of climate change and allow viewers to come to the personal realisation, through the VR experience, that greater and more decisive action needs to be taken.

The aforementioned James Calvert is the director and writer of Thin Ice VR said the production is as close to an authentic experience as you can get without travelling to the Antarctic, and added: “Deciding to take on the same challenge that Jarvis did in recreating Shackleton’s adventure may be too much for most people.

“However, we want audiences to experience Shackleton’s epic story for themselves and learn from his leadership. Thin Ice VR lets us all walk directly in his footsteps.

"The story extends beyond that of Shackleton’s, to the plight of the greater Antarctic region – a place under threat from climate change. Thin Ice gives us all a chance to experience the wonder of this place with our own eyes, where we can see for ourselves the impact of climate change over the last 100 years.”

Incredibly, the team travelled to some of the most remote and hard to reach locations in the Antarctic region to capture the exact locations from Shackleton’s epic journey.

Calvert explained: “Using multiple filming techniques, including photogrammetry and volumetric motion capture, we can walk directly in Shackleton’s footsteps, see the wonder of the Antarctic with our own eyes, and witness the impact of climate change of the past century."

Thin Ice Presenter and Executive Producer, Tim Jarvis AM, said recreating Shackleton’s journey of survival was a lesson in the determination, optimism and leadership needed to prevail against the odds, and added: "Thin Ice brings his story to life at a time when we urgently need to learn from what he stood for to prevail against the enormous challenges we now face to save our planet,” said Jarvis.

“Shackleton’s goal was to save his men from the ice. Today it is the ice that needs saving from us and the human-induced climate change that threatens it.”

To coincide with the (now still pending) launch of Thin Ice VR, Torrens University is offering a free online short course with up to two hours of educational material.

Throughout the course participants will be guided through five interactive lessons co-designed by Tim Jarvis AM and James Calvert, who will provide insight and knowledge backed by science, and practical proven measures we all can undertake to help create a positive change for our future.

The course will enable participants to:

The course was made available from Tuesday 13 July, and is free to anyone. Teachers and school students are particularly encouraged to utilise the course content for classes or encouraged to complete the short course in their own time. More information can be found here.

Here's the intro video for the short course:

There was also to be an Industry Session titled "The Making of VR Work Think Ice VR", where the makers were to discuss discuss shooting in Antarctica, working with new and old footage and capturing 3D imagery. More details of the event, which is now presumably also rescheduled to later this year, are available here.

Torrens University Australia says it is "proud to be the Major Partner of Thin Ice VR and to deliver the free short course. As a Certified B Corporation, Torrens University is driven by the pledge to fundamentally ‘Be Good’ and make a positive impact on society, economy, education and research."

Thin Ice VR is part of Calvert’s research into virtual reality for education and is the second VR project that Calvert has been involved in at Torrens University. In 2017, he was the Project Lead on a VR collaboration between Torrens University and the ABC that immerses school students in the main events of the World War 2 Kokoda track campaign.

Sir Ernest Shackleton made his third trip to the Antarctic in 1914 with the ship Endurance, planning to cross Antarctica via the South Pole. The Endurance became trapped in ice early in 1915 and 10 months later, sank. Shackleton and his crew had already abandoned the ship to live on the floating ice.

In April 1916, they set off in three small boats, eventually reaching Elephant Island. Shackleton and five of his crew members then went to seek help, spending 16 days crossing more than 1,300 kilometres of ocean to reach South Georgia before trekking over the island’s mountains to a whaling station. The remaining men from the Endurance were rescued in August 1916. Incredibly, all members of Shackleton’s expedition team survived.

More in this category: « The Brag Media to release an exclusive NFT of Rolling Stone Australia cover Livid! Vivid Sydney 2021 COVID cancelled, planning underway for 2022 »
Share News tips for the iTWire Journalists? Your tip will be anonymous